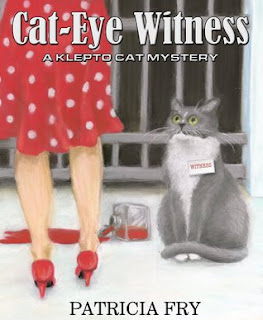 Synopsis:
Savannah and Aunt Margaret open the old Forster home to the Hammond Cat Alliance for a fundraiser to help rehabilitate the abused horses rescued months earlier from the catnappers. Before the afternoon is over, the funds collected go missing and someone is murdered in an upstairs bedroom. Suspicion surrounds Iris, a local waitress and Savannah’s new best friend. The only witness to the murder is Rags, Savannah’s cat. With the assistance of a cat psychic and Rags’s good friend, Charlotte (the young girl with Downs), the cat helps to “paw” the killer…but not before an attempt is made on Rags’s life. The case is solved only after Rags comes face-to-face with the killer for the second time under most unusual circumstances

What did I think of this book:
I thought this was a fun addition to this series. I liked that Savannah and her aunt opened up the home for a fundraiser to help abused animals. We are big animal rescuerers in my house so this really appealed to me. But it all goes wrong when a person is murdered and money is missing. The author makes this a fun mytery to solve since the only witness is Rags the cat. So we have to bring in Charlotte so she can communicate with hime to help find out who committed these crimes. We get a little scare in this one as someone tries to hurt Rags. Who would want to do that. I enjoy following along on Rags adventures and how we are kept guessing with the twists in this book. It makes the story fun to read. For me this was a quick enjoyable read. If you are a cat lover and a mystery fan you will enjoy this fun series.

About the author:
Patricia Fry began writing articles for magazines in 1973 and that's how she earned her living for decades. Her first book was accepted by a New York publisher in 1978. Every five years, or so, she'd evaluate the potential for her writing business and make adjustments accordingly. In 1983, she established a publishing company (Matilija Press) and began producing her own books. By the late 1990s, she was teaching publishing workshops. She wrote her first of many books for authors in 2000 and she also became a speaker at writers' conferences in many cities throughout the US. Around the same time, she hung out her shingle and started working with other authors on their book projects.

Nearly forty years after she began writing for publication, with forty nonfiction books to her credit and after working with many dozens of clients on their fiction and nonfiction books, she felt she was at a crossroads. Patricia reminisces about that period in her life. "All my friends were retiring. I wondered if I should, too. But how does one retire from something they love? Writing is not just a job, it's my passion."

The year was 2012. Patricia knew it was time for another career shift and she asked herself, "What writing dreams have not been fulfilled?" The answer came in one word: FICTION. That year, she gave herself a birthday gift--the time and space to write a novel.

She says, "The idea came rather quickly. And within a relatively short time, I was the author of a published novel, "Catnapped", the first in the Klepto Cat Mystery series." Every two or three months since, Patricia has produced a new book in the series. While you're urged to read these books in order, many readers agree that each book can be read as a standalone.

"I write these cozy mysteries with love and hope that you enjoy my stories." (Patricia Fry)

The Klepto Cat Mysteries are light, fun cozy mysteries full of adventure, intrigue, and a little romance. They feature Rags, an ordinary cat who just can't keep his paws off other people's things. Often, the treasures he finds are clues in a mystery. Follow Rags's fascinating life path from when he and Savannah were single and he roamed the neighborhood stealing everything from toys belonging to large dogs to jewelry and bathing suits.

Rags and Savannah don't stay single long. After meeting Michael, a handsome veterinarian, Savannah settles down, but the cat doesn't change his thieving ways. Even though his kleptomaniac habit is annoying and embarrassing to his family, he has earned the respect of the local sheriff's department and he was even asked to star in a documentary.

Find out more at: http://www.matilijapress.com
Posted by Angela - Bookaunt at Monday, April 25, 2016