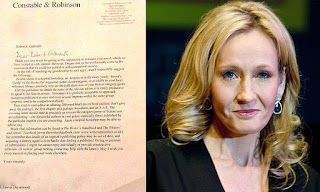 “I pinned my 1st rejection letter to my kitchen wall because it gave me something in common with all my fave writers!” – J.K. Rowling via Twitter (March 25, 2016).

What do literary geniuses, J.K. Rowling, Dr. Seuss, F. Scott Fitzgerald, George Orwell, and Agatha Christie all have in common? Surprisingly enough, each of them have written books that were rejected by multiple publishers. As hard to believe as that may be, it’s entirely true!

Contrary to popular belief, rejection more than anything is a learning opportunity. Of course, no one welcomes rejection. In fact, they avoid it at all costs. But everyone gets rejected at one point in their life, or another, and instead of dwelling on the pain of being told “no”, they can use that rejection as a motivator – the greatest motivator in their life!

On March 25, 2016, J.K. Rowling took to twitter to share two rejection letters she received on her crime novel, “The Cuckoo’s Calling”, written under the alias of Robert Galbraith. While Rowling’s “Harry Potter” series has sold more than 400 million copies to date, Rowling admits to having self-doubt. “I wasn’t going to give up until every single publisher turned me down, but I often feared that would happen” she explains. Despite these fears, “The Cuckoo’s Calling” was eventually published by Sphere Books, an imprint of Little, Brown & Company, and the rest is history.

Rowling didn’t allow the fear of going unpublished stop her from trying time and time again, which is an example many dreamers can learn from. Yes, rejection bruises a person’s ego and, more often than not, forces them to go back to the drawing board, but sometimes that’s the best thing a person can do. Going back to the drawing board means making improvements both personally, and in one’s work, and making those improvements brings the motivation to pursue that passion even further.

Remember, rejection isn’t a death sentence, but merely a stepping stone which brings you closer to finally hearing that “yes” you’ve been waiting for. Though it might sound crazy to hang a negative note about your life’s work up on a wall, it can serve as a reminder to persevere…and when you achieve your success, it will be a reminder of all that you’ve overcome.

Added Bonus
As an added perk of Reader’s Legacy’s Rowling celebration, we will be holding a special 20% off sale for each of her novels from April 25th to April 30th – ReadersLegacy.com/JKRowling.