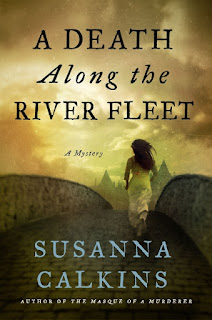 Lucy Campion, a ladies’ maid turned printer’s apprentice in 17th-century London, is crossing Holborn Bridge over the murky waters of the River Fleet one morning when, out of the mist, she sees a specter moving toward her. Frightened at first, Lucy soon realizes the otherworldly figure is in fact a young woman, clearly distraught and clad only in a blood-spattered white nightdress. Barely able to speak, the woman has no memory of who she is or what’s happened to her. The townspeople believe she’s possessed. But Lucy is concerned for the woman’s well-being and takes her to see a physician. When, shockingly, the woman is identified as the daughter of a nobleman, Lucy is asked to temporarily give up her bookselling duties to discreetly serve as the woman’s companion while she remains under the physician’s care.

As the woman slowly recovers, she begins—with Lucy’s help—to reconstruct the terrible events that led her to Holborn Bridge that morning. But when it becomes clear the woman’s safety might still be at risk, Lucy becomes unwillingly privy to a plot with far-reaching social implications, and she’ll have to decide just how far she’s willing to go to protect the young woman in her care.

Susanna Calkins has drawn a richly detailed portrait of a time in history and a young woman struggling against the bounds of her society in her next absorbing Lucy Campion mystery.

What did I think of this book:
This was a good historical mystery book. I liked how it included the London Fire and thanks to the author's historical detail I felt as if I learned a little more while enjoying this story. It was also nice how the author gives us a little glimpse into each of the characters lives so we can get to know them a little better. Lucy does her best to find out the mystery behind the woman she finds wandering the streets in a bloody shift. As the story progresses we find more secrets which help the story to unravel. I thought the story had a steady pace. Even though this book is a part of a series it can be read as a stand alone book. I am looking forward to the next book in this series.

About the author:
SUSANNA CALKINS became fascinated with seventeenth-century England while pursuing her doctorate in British history and uses her fiction to explore this chaotic period. Originally from Philadelphia, Calkins now lives outside of Chicago with her husband and two sons. A Death Along the River Fleet is her fourth novel.

Giveaway:
This giveaway is open to the US only and is for one paperback copy of A Death Along the River Fleet. It is mandatory that you leave a blog post comment to win. This will be verified and if not done you will be disqualified. The wimmer will be drawn randomly by rafflecopter. Once the winner is drawn they will be emailed and have 24 hours to respond. If you do not respond a new winner will be drawn. Good Luck.

Blog Tour Schedule
Tuesday, April 12
Blog Tour Kick Off at Passages to the Past

Wednesday, April 13
Review at A Chick Who Reads

Thursday, April 14
Review at History From a Woman’s Perspective
Interview at The Book Connection

Friday, April 15
Interview at Dianne Ascroft’s Blog
Review at One Book Shy of a Full Shelf

Wednesday, April 20
Review & Guest Post at With Her Nose Stuck in a Book

Saturday, April 23
Review at Queen of All She Reads