A Flight of Arrows by Lori Benton - Review 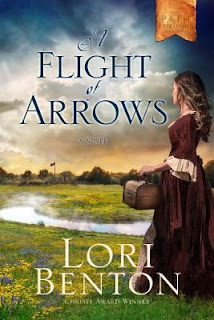 It is said that what a man sows he will reap--and for such a harvest there is no set season. No one connected to Reginald Aubrey is untouched by the crime he committed twenty years ago.

Not William, the Oneida child Reginald stole and raised as his own. Identity shattered, enlisted in the British army, William trains with Loyalist refugees eager to annihilate the rebels who forced them into exile. Coming to terms with who and what he is proves impossible, but if he breaks his Loyalist oath, he'll be no better than the man who constructed his life of lies.

Not Anna, Reginald's adopted daughter, nor Two Hawks, William's twin, both who long for Reginald to accept their love despite the challenges they will face, building a marriage that bridges two cultures.

Not Good Voice and Stone Thrower, freed of bitterness by a courageous act of forgiveness, but still yearning for their firstborn son and fearful for the future of their Oneida people.

As the British prepare to attack frontier New York and Patriot regiments rally to defend it, two families separated by culture, united by love, will do all in their power to reclaim the son marching toward them in the ranks of their enemies.

What did I think of this book:
I really enjoyed reading this book. It has many things that I enjoy reading about, history, Native Americans, Revolutionary War, action, and a little romance. You can tell that the author did her research in writing this story. By doing so it adds so much more to the story as well as brings the time and place to life on the pages. I felt bad for William when he found out his true identity and all he had to go through to find out who he really is. It was nice to read Anna and Two Hawks story as well. This book was so well written that once I started reading it I did not want to put it down while at the same time I did not want it to end. It is a good author that can make you feel that way about a book. This is the second book in this series and I would suggest you read book one (The Wood's Edge) before emarking on this journey. With that being said I am looking forward to book three.

About the author:
Lori Benton was born and raised east of the Appalachian Mountains, surrounded by early American and family history going back to the 1600s. Her novels transport readers to the 18th century, where she brings to life the Colonial and early Federal periods of American history, creating a melting pot of characters drawn from both sides of a turbulent and shifting frontier, brought together in the bonds of God's transforming grace.