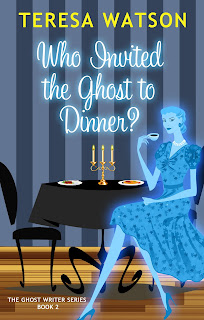 Synopsis:
Cam Shaw is hoping that her life will be ghost-free from now on. But that hope dies with the appearance of Mac “the Faker” Green, a wise-cracking ghost from Vegas who has followed her grandmother home. And during the opening night of Blithe Spirit, someone has sent Susan Ingram to her ghostly afterlife. What does her death have to do with the death of her mother-in-law fifty years ago? Who is trying to wipe out the Ingram family one person at a time? And when will that Vegas ghost stop sticking his nose into Cam’s business?

Guest Post:
Paranormal International interview
Matthew: We’re back with Cam Shaw and Mike Penhall. One of my experts backstage is telling me that there seems to be some paranormal activity in the studio. (audience gasps again)

Mac: Where are we? Is this one of those tacky talk shows your grandma likes to watch? When does the chair tossing start?

Matthew: (puts his fingers against his earpiece) Are you sure? (He looks at Cam) Ms Shaw, is there a ghost sitting next to you?

Mac: What would your father say if he knew you were lying to this nice gentleman?

Matthew: Did you just tell me to shut up?

Matthew: (bounces in his seat excitedly) So there IS someone here! Who is it? Is it Mac?

Cam: No, he’s not! It was one time, and it was a total accident.

Mac: I had no idea that she was changing clothes when I popped…

Mac: It’s not like anyone but you can hear me! Lighten up.

Matthew: Mac, could you show yourself to the studio audience?

Matthew: Not even you, Chief Penhall?

Mike: Definitely not me. If I could see him, I might strangle him.

Matthew: (laughs) So you’d try and kill a ghost? Is there a law against that?

Mac: Yeah, Mike, what’s the penalty for ghostly strangulation? Life? (he smacks Mike on the back of his head)

Mike: (rubs the back of his head) Ow! What the heck?

Matthew: This is so exciting! We’ve never had a ghost on the show before! Why didn’t you tell my producer you were bringing him with you?

Cam: I didn’t plan this. I don’t have any control over him whatsoever. He definitely does as he pleases.

Matthew: Let me ask you this: If you’ve solved the murder, then why is he still here?

Cam: Because we haven’t solved his murder yet.

Matthew: Do you know how he was killed?

Mac: It was a dark and stormy night…

Mike: The only thing we know for sure is that his body is buried under a ton of asphalt in a wedding chapel parking lot. Maybe he tried to run off with someone else’s bride, and they decided to flatten him like a pancake with a steamroller.

Mac: You’d like that, wouldn’t you? Cold hearted baboon. I don’t know what she sees in you…

Matthew: But you are planning to solve his case, correct? And are you planning to assist her, Chief Penhall?

Mike: No, she is not going to be solving his case. This falls under the Las Vegas PD jurisdiction, so it will be up to them to decide if they want to tear up a parking lot to find his body and solve this cold case. Frankly, I don’t know why anyone would bother. The guy is a royal pain.

(Mike’s seat is pulled out from under him, and he lands on the floor. The chair is tossed aside, and the audience gasps, then starts hooting and hollering. Mac grabs the papers out of Matthew’s hands and throws them in the air as the lights flicker off and on)

Matthew: Um...we’ll be right back after this commercial break. (runs offstage)

Mac: That was fun! When’s our next interview?

About the author:
I’m the daughter of a semi-retired Methodist minister, and have spent most of my life living in Texas and New Mexico (no, I am not a native Texan; I was born in the state of Washington). I graduated from West Texas A&M University with a bachelor’s degree in 2000. I taught school for a couple of years before realizing that I really wanted to spend my time writing.

I’m a daughter, mother, wife, sister. Currently, I live in North Texas with my husband (still getting used to being an empty nester!). I love sports, and spend my free time harassing my husband about his Cowboys losing to my Redskins (and Steelers). Who Invited the Ghost to Dinner?

is my tenth book (second book for the Ghostwriter series). I also write the Lizzie Crenshaw Mysteries (next book for this series is Death Drives a Zamboni).