The Rivals of Versailles by Sally Christie - Review and Giveaway 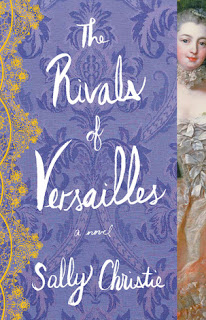 Synopsis:
In this scandalous follow-up to Sally Christie’s clever and absorbing debut, we meet none other than theMarquise de Pompadour, one of the greatest beauties of her generation and the first bourgeois mistress ever to grace the hallowed halls of Versailles. The year is 1745. Marie-Anne, the youngest of the infamous Nesle sisters and King Louis XV’s most beloved mistress, is gone, making room for the next Royal Favorite.

Enter Jeanne-Antoinette Poisson, a stunningly beautiful girl from the middle classes. Fifteen years prior, a fortune teller had mapped out young Jeanne’s destiny: she would become the lover of a king and the most powerful woman in the land. Eventually connections, luck, and a little scheming pave her way to Versailles and into the King’s arms.

All too soon, conniving politicians and hopeful beauties seek to replace the bourgeois interloper with a more suitable mistress. As Jeanne, now the Marquise de Pompadour, takes on her many rivals—including a lustful lady-in-waiting; a precocious fourteen-year-old prostitute, and even a cousin of the notorious Nesle sisters—she helps the king give himself over to a life of luxury and depravity. Around them, war rages, discontent grows, and France inches ever closer to the Revolution.

Enigmatic beauty, social climber, actress, trendsetter, patron of the arts, spendthrift, whoremonger, friend, lover, foe. History books may say many things about the famous Marquise de Pompadour, but one thing is clear: for almost twenty years, she ruled France and the King’s heart.

What did I think of this book:
This book is a continuation from the first book in the series: The Sisters of Versailles. I really liked that this book picked up right where the other one left off. The author does her research as it shows in the descriptions. I have not read anything about Madame de Pompdaur before so I felt as if I was learning a piece of history along with enjoying a captivating story. That is always a plus for me. I also enjoyed the letters that were included. They made the story even more real to read. Sally Christie has a way of making her characters really come off the pages. If you love French history then you will enjoy this book. I can't wait until the final book in this trilogy comes out. It will be interesting to see how it all ends.

Sally Christie is the author of The Sisters of Versailles. She was born in England and grew up around the world, attending eight schools in three different languages. She spent most of her career working
in international development and currently lives in Toronto.

Learn more about the sisters and the mistresses in the Versailles trilogy on her website
Become a fan to hear about her next novels!

Guest Post:
Being a Lady in Waiting at Versailles: Not all fun and games

It’s impossible to ignore the role of Queen’s ladies-in-waiting when writing about Versailles. Being a lady of the Queen was the highest position available to women at the Court of Versailles, and they were always chosen from amongst the greatest nobility in the land. When Queen Marie Leszczynska arrived from Poland to marry Louis XV in 1725, there was great jockeying and maneuvering to get one of the plum positions in her household: 3 senior attendants and 12 “ladies”.

Each lady was on duty for 8 days then off for 21; the Queen always had a minimum of 3 ladies in attendance, in addition to the more full-time senior positions. Their main duties were to accompany the Queen throughout the functions of her day, at chapel, dinner, walking around, dressing, etc. Marie Anne and Hortense, two of the Nesle sisters and protagonists of my novel The Sisters of Versailles, both gained positions with the Queen and were on duty with the Duchesse d’Antin (Gilette in the novel) and the Princesse de Montauban. Their “week” was known as the Beautiful Week (la belle semaine) as all four were very beautiful. One can imagine that visits to poor dull Queen Marie increased substantially during that week!

Being a lady-in-waiting could sometimes be very tedious, and it certainly wasn’t all fun and games. When they were in attendance, Ladies always had to be in “grand habit” (the uncomfortable Court dress), and only had relief when the Queen was pregnant; in sympathy, her Ladies were also allowed to dress more comfortably. Luckily, Queen Marie had 11 pregnancies in the first 10 years of her marriage, so they got quite a bit of relief!

There were other more bizarre duties. An amusing, and horrifying, description of what happened after the death of the Dauphine (the wife of the heir to the French throne) is included in The Rivals of Versailles: like the Queen, the Dauphine had her full complement of ladies, and her senior ones had to be in attendance during her autopsy, and one even had to hold a plate with the dead woman’s heart on it! The lady tasked with this distasteful duty fainted, and the diarist recording the scene noted wryly: “Everyone wondered why she fainted, as there was no love lost between her and her late mistress.”

Madame de Pompadour, the star of my book The Rivals of Versailles, was of very humble birth compared to the high aristocrats of Versailles, but later in life she managed to be named a Lady to the queen - a great honor, and, according to some sources, it was the sign of prestige that she desired the most, even more than all her houses and riches.

Giveaway:
Global giveaway open to US residents only:
5 participants will each win a print copy of this book
Entry-Form