Death at the Paris Exposition by Frances McNamara - Review and Giveaway 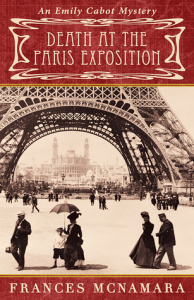 Synopsis:
Amateur sleuth Emily Cabot’s journey once again takes her to a world’s fair—the Paris Exposition of 1900. Chicago socialite Bertha Palmer is named the only female U. S. commissioner to the Exposition and enlists Emily’s services as her secretary. Their visit to the House of Worth for the fitting of a couture gown is interrupted by the theft of Mrs. Palmer’s famous pearl necklace. Before that crime can be solved, several young women meet untimely deaths and a member of the Palmer’s inner circle is accused of the crimes. As Emily races to clear the family name she encounters jealous society ladies, American heiresses seeking titled European husbands, and more luscious gowns and priceless jewels. Along the way, she takes refuge from the tumult at the country estate of Impressionist painter Mary Cassatt. In between her work and sleuthing, she is able to share the Art Nouveau delights of the Exposition, and the enduring pleasures of the City of Light, with her husband and their children.

What did I think of this book:
This is the first book I have read in this series and by this author. Although this is number six in a series I was not lost and was able to enjoy the book. I will say that now I do want to get back and catch up on this series. The author did a good job of capturing the time and place making this historically accurate. I liked that Emily was able to work with the French police and they respected her which in that time period was not always the case. I also liked how the author included real people, places and events in the telling of this story. With all the descriptions you can really get a feel for all things involved. This book will capture your attention from the first page and not let go until the end. I was kept guessing until the end  A good book and I am looking forward to reading more by this author.

About the author:
Frances McNamara grew up in Boston, where her father served as Police Commissioner for ten years.
She has degrees from Mount Holyoke and Simmons Colleges, and recently retired from the University of Chicago. She now divides her time between Boston and Cape Cod. She is the author of five other titles in the Emily Cabot Mysteries series, which is set in the 1890s and takes place primarily in Chicago: Death at the Fair, Death at Hull House, Death at Pullman, Death at Woods Hole, and Death at Chinatown.

Buy the book: on Amazon

Tuesday, September 20
Review + Guest-Post + Giveaway at
Queen of All She Reads

Monday, September 26
Review + Giveaway at
History from a Woman’s Perspective

Wednesday, September 28
Review + Giveaway at View from the Birdhouse