• No explicit language and the only scene with any lack of clothing contains no actual sex.

About this book
Crime reporter Colleen Caruso has an appetite for romance…and trouble. When someone tries to poison Ken Rhodes (her handsome boss and boyfriend), Colleen vows to hunt down the culprit and serve them up to the police. She’s whisked away into the scrumptious world of restaurants and gourmet food as she tangles with four culinary divas from Ken’s past.

Trouble is, Colleen doesn’t know when to turn down the heat.

Is this Jersey Girl’s investigation a recipe for disaster?

Or will the poisoner get their just desserts?

Meet the author - Jo-Ann Lamon Reccoppa
Jo-Ann Lamon Reccoppa is the creator of the Jersey Girl Cozy Mystery series, which includes New Math is Murder; Hide nor Hair, and the latest installment, Another Man’s Poison. Her short fiction has appeared in many magazines and anthologies. Reccoppa worked as a stringer for Greater Media Newspapers for many years and wrote hundreds of articles, covering everything from serious medical stories to restaurant reviews. She draws on her past newspaper experience to create quirky characters and outlandish scenarios for the Jersey Girl Cozy Mystery series.

Other books in this series:

Guest post
Why Tranquil Harbor? I Live There. That’s My Story. And I’m Sticking to it.

Just so there’s no misunderstanding, Colleen Caruso, my main character in the Jersey Girl Cozy Mystery series, lives in Tranquil Harbor, New Jersey. Jo-Ann Reccoppa does not. That’s not to say I wouldn’t want to live there. For the most part, the suburban bedroom hamlet is gorgeous. The truth is, I probably couldn’t afford to live there – but I’m working on it. There’s also a rural part in the forty-plus square mile town where the denizens aren’t so prosperous. I’m trying to my best not to take up residence in that section.

Colleen lives in the better part of town. She’s a reporter (just as I was) for the local community newspaper. She’s also a mom, a daughter, a sister, and with a little luck will soon be her boss’s lover. Her main goal is to be the number one reporter at the newspaper. Her second aspiration, which comes every summer, is to get a decent tan – though with her genetic Irish/Italian makeup, she either stays deathly white from excessive sunblock or burns to crisp from using tanning lotion with a low SPF. We have so much in common.

I fictionalized the town only because I didn’t care to run into any libel trouble down the road. You just never know who you will offend. Because I live close to Raritan Bay, I tucked Tranquil Harbor in amongst many of the real towns on our lovely waterfront. 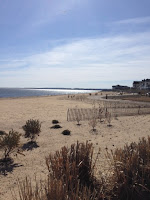 I also thought a shore community would be an ideal setting for a murder. Why? Because there are plenty of people I’d like to murder (wink, wink), there are loads of places to hide a body, and writers tend to write what they know. Describing ocean-front settings makes me smile, and New Jersey (better known to the rest of the country for refineries and Thunder Road) is chock-full of spectacular beaches, further evidenced by the shots below: 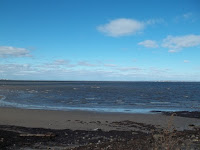 Great settings, right? Unfortunately, most of the action in each book in this series takes place indoors. I mean, you can dump a body anywhere, but it’s hard to kill someone off in my part of the state. It’s crowded here. There’s always someone around to see you commit the crime. They like ocean views morning, noon, and night and they watch, and watch, and watch.