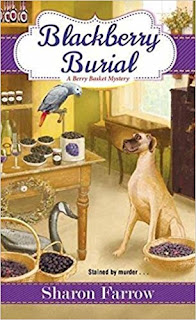 As owner of The Berry Basket, Marlee Jacob has learned a thing or two about surviving the summer tourist season in Oriole Point. So she gladly agrees to help run the annual road rally in honor of the local Blackberry Art School’s centenary celebration. While alumni arrive from around the country, Marlee hopes the expansive Sanderling farm will make an appropriate starting point for the race—despite rumors that the land is cursed . . .

But when Marlee surveys the property, she stumbles upon a long-dead body hidden in the bramble. It’s a horrifying mystery to everyone except her baker, who’s convinced the skeletal remains belong to a former student who had gone missing twenty years earlier. As the Fourth of July activities heat up, Marlee must rush to catch an elusive murderer—before the next ‘blackberry victim’ is ripe for the picking!

Meet the author - Sharon Farrow
Sharon Farrow is the latest pen name of this award winning Michigan author. She is also the co-author of the two-time Agatha nominated Eliza Doolittle and Henry Higgins mystery series written under the joint pseudonym D.E. Ireland. A freelance writer since her twenties, Sharon has been published in mystery, fantasy, and romance; one of her short stories has been optioned for film. She currently lives along the beautiful Lake Michigan shoreline where the Berry Basket cozy mystery series is set. Visit her online at SharonFarrowAuthor.com, on Facebook Sharon Farrow Author, or Twitter @SharonFarrowBB.

My thoughts
I have enjoyed this book just as much as the first one in the series if not more. I like how the author gives you tidbits about the fruit in the title this one just happens to be blackberries. It was fun to go back to the Berry Basket and our friends from the little town. I liked how the people of the town have a special bond with each other. If my new puppy would have dug up a skeleton I think I would have been a little freaked out. I like that the author puts enough twists and turns in the story to keep you guessing. There were multiple suspects which made it fun to guess who was the actual one who was the guilty party. Be sure to have a snack handy while reading this book as reading about all the tasty treats will leave you hungry. This is one of my favorite series and I highly recommend it. I am looking forward to the next book in the series.
Posted by Angela - Bookaunt at Tuesday, October 31, 2017