Paris for One and Other Stories by Jojo Moyes 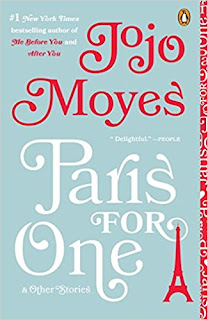 Book description
Nell is twenty-six and has never been to Paris. She's never even been on a romantic weekend away—to anywhere—before. Traveling abroad isn't really her thing. But when Nell's boyfriend fails to show up for their mini-vacation, she has the opportunity to prove everyone—including herself—wrong. Alone in Paris, Nell finds a version of herself she never knew existed: independent and intrepid. Could this turn out to be the most adventurous weekend of her life? Funny, charming, and irresistible, Paris for One is quintessential Jojo Moyes—as are the other stories that round out the collection.

My thoughts
I listened to the audio version of this book. I really enjoyed Nell's story. She was a person I could really connect with. Her boyfriend was a real jerk but in the end he got his justice a little. The guy she met in France (his name has escaped my memory - I forgot to write it down) was a guy we would all like to meet. Their story could have gone on longer for me. Now as for the rest of the book and the other short stories I did not care for. It seemed to me that they were disjointed. They felt like you were only getting a part of a story, no real beginning or ending for me. Even though I did not like the second have of the book I am glad I listened to the book.

She is married to journalist Charles Arthur and has three children.
Bio from Goodreads.
Posted by Angela - Bookaunt at Tuesday, October 24, 2017