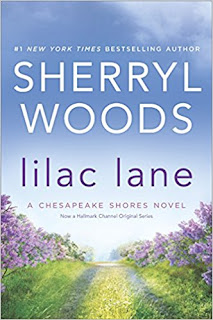 About this book
No one writes about friends, family and home better than Sherryl Woods. Told with warmth and humor, Lilac Lane is a brand-new story in her beloved Chesapeake Shores series, one readers all over the world have waited two years to read!

Excerpt
Owning a pub like this is the perfect fit for you, Luke. You couldn’t do better if you’d been born and bred in Ireland.”

He gave her a startled look. “You couldn’t have found a compliment that could please me more, Kiera. I wasn’t at all sure I had a niche in life when we first met in Ireland,” he admitted.

His candor revealed a rare insecurity, especially for an O’Brien. Kiera was touched that he felt comfortable sharing his feelings with her. “How can that be? I thought everyone in your family was born with confidence to spare.”

Luke laughed. “It certainly seems that way, but I was the youngest and had none of the passion for a career that every- one else seemed to have. I discovered what I was meant to do while I was in Dublin. The more pubs that Moira and I visited around the countryside, the surer I felt that this could be my calling. Even then, I had no idea how my family would react. They tend to be overachievers. I feared having my own pub here in Chesapeake Shores wouldn’t measure up as much of an accomplishment.”

“Did they find fault with your choice?” she asked curiously. She knew Mick and Luke’s own brother had international reputations as architects and urban planners. His uncle Thomas O’Brien ran a foundation dedicated to saving the Chesapeake Bay from environmental toxins. His aunt Megan, of course, had major connections in the art world, which she’d used to Moira’s benefit. His cousin Bree was known for her plays that had been produced locally, by a regional theater in Chicago and even on Broadway. There wasn’t a one of them who couldn’t claim success in their field. Had they judged Luke’s ambition to be less than theirs?

“My father questioned it at first. He thought it was too big a risk, but Uncle Mick got it right away, as did my grand- mother. To my father’s dismay, they were quite vocal with their support.”

“I should think so,” Kiera said. “Neighborhood pubs are a fine Irish tradition. Aren’t there bars in the States that are similar?”

“I wanted this place to be more than just another bar. I wanted it to be a community gathering spot,” Luke said.

He gestured at the arrangement of tables, subtly done to make conversation easier between tables. The antique bar he’d imported from Ireland had space for a dozen people, and a mirror behind it that allowed customers to speak to others seated several stools away and still see their reactions mirrored on the wall. And while the colors he’d chosen ref lected the waterfront setting more than an Irish pub might, they were warm, inviting shades of the sea. There was even a bit of a dance f loor carved out in front of the area where Irish bands played on weekends.

“Well, if your regulars are to be believed, you’ve achieved that,” Kiera told him. “I myself can see that you’ve created a place that’s comfortable, friendly and the first place to go for the local gossip.” She hesitated deliberately, then taunted, “That is if you haven’t already picked it up at Sally’s in the morning.”

Luke laughed. “I like to think we come by a few tidbits of news first right here, if only because Uncle Mick seems to know everything and finds my bar the perfect place to be sharing it. O’Brien’s may be my pub, but Uncle Mick reigns over it.”

“Now, that has the ring of truth, to be sure.” With the time for the pub’s midday opening almost upon them, Kiera reminded them both that they needed to get back to work. “You’d best get busy on that paperwork now. Leave the bar to me.”

“I’m right here if you need me,” Luke told her. “Or ask Bryan. He’s filled in a time or two when we’ve been short- staffed.”

“I’ll do my best to handle it without bothering either one of you,” Kiera said, and headed off to check on supplies. She stopped short when she found Bryan seated at the end of the bar with a cup of coffee.

“And shouldn’t you be in the kitchen?” she inquired lightly, trying to calm the unexpected flutter of nerves she got at the

sight of him. What was it about him that affected her so? He was annoying, to be sure, but it was more than that. Maybe that impossible nature of his reminded her just the tiniest bit of Sean Malone, which was far from a recommendation.

As if to prove her point about his difficult nature, he immediately bristled at the hint of accusation in her voice. “Kiera, I’ve been running the kitchen quite efficiently for some time now. I don’t need you to tell me how to do it. I believe I’ve mentioned that before.”

She winced. “More than once,” she said stiff ly. And here they went again, off on the wrong foot, just when she’d been trying to convince both Luke and herself that they could manage to get along.
.