Hanna Who Fell From The Sky by Christopher Meades - Review 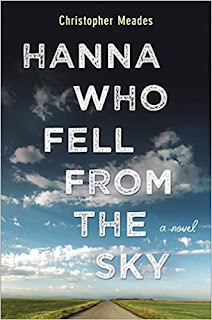 Hanna has never been outside her secluded community of Clearhaven. She has never questioned why her father has four wives or why she has fourteen brothers and sisters. And in only one week, on her eighteenth birthday, Hanna will follow tradition and become the fifth wife of a man more than twice her age.

But just days before the wedding, Hanna meets Daniel, an enigmatic stranger who challenges her to question her fate and to follow her own will. Then her mother tells her a secret—one that could grant Hanna the freedom she’s known only in her dreams. As her world unravels around her, Hanna must decide whether she was really meant for something greater than the claustrophobic world of Clearhaven. But can she abandon her beloved younger sister and the only home she’s ever known? Or is there another option—one too fantastical to believe?

With lush, evocative prose, Christopher Meades takes readers on an emotional journey into a fascinating, unknown world—and, along the way, brilliantly illuminates complexities of faith, identity and how our origins shape who we are.

“Beautiful and delicate, Meades has written a powerful meditation on how we define ourselves, the gift and cruelty of faith, and the redemptive act of storytelling. A gorgeous blend of dreamy folklore and gritty reality.” -Erika Swyler, bestselling author of The Book of Speculation

“A strange and beautiful fable with shades of Deliverance, Room, and Winter’s Bone.” -Laline Paull, award-winning author of The Bees

“As she slashes through the mythology that restrains her, Hanna rises like a phoenix. Christopher Meades weaves a feast of paradox and surprise.” -Benjamin Ludwig, author of Ginny Moon

“Compelling and provocative, Meades weaves elements of magical realism into his poignant coming-of-age tale. In Hanna, readers will find a new heroine, one who uncovers the secrets of her repressive society as she journeys toward self-discovery.” -Paula Treick DeBoard, author of The Drowning Girls

“With original characters and graceful prose, Christopher Meades has created an indelible novel about faith, family and love. Your heart will soar and ache for Hanna on her thoroughly original coming-of-age journey.” -Kelly Simmons, author of The Fifth of July

Meet the author - Christopher Meades
Christopher Meades is the author of three previous novels, including THE LAST HICCUP, which won the 2013 Canadian Authors Association Award for Fiction. In addition, Meades’s work has appeared in several literary journals including The Potomac Review and The Fiddlehead. He lives in British Columbia, Canada, with his family.

My thoughts
I thought this was an interesting book. It was a little out of my norm to read this book but sometimes it is good to try something new. This book gave me a look into a different world in which Hanna has had to live. Hanna was a good girl in wanting to take care of her sister but at the same time after hearing stories from another family she wants to leave. How to choose? The author did a good job with his many descriptions from the places and people to the emotions the characters were feeling. His writing style was smooth and easy to read.