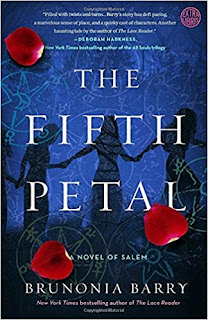 Book description
Could a witch hunt happen again in Salem?

For readers of Deborah Harkness's A Discovery of Witches, New York Times bestselling author of The Lace Reader Brunonia Barry returns to Salem with this spellbinding new thriller, a complex brew of suspense, seduction and murder.

When a teenage boy dies suspiciously on Halloween night, Salem's chief of police, John Rafferty, wonders if there is a connection between his death and Salem’s most notorious cold case, a triple homicide dubbed "The Goddess Murders," in which three young women, all descended from accused Salem witches, were slashed on Halloween night in 1989. He finds unexpected help in Callie Cahill, the daughter of one of the victims newly returned to town. Neither believes that the main suspect, Rose Whelan, respected local historian, is guilty of murder or witchcraft.

But exonerating Rose might mean crossing paths with a dangerous force. Were the women victims of an all-too-human vengeance, or was the devil raised in Salem that night? And if they cannot discover what truly happened, will evil rise again?

Meet the author - Brunonia Barry
Brunonia Barry is the New York Times and international best selling author of The Lace Reader and The Map of True Places. Her work has been translated into more than thirty languages. She was the first American author to win the International Women’s Fiction Festival’s Baccante Award and was a past recipient of Ragdale Artists’ Colony’s Strnad Fellowship as well as the winner of New England Book Festival’s award for Best Fiction and Amazon’s Best of the Month. Her reviews and articles on writing have appeared in The London Times and The Washington Post. Brunonia co-chairs the Salem Athenaeum’s Writers’ Committee. She lives in Salem with her husband Gary Ward and their dog, Angel. Her new novel, The Fifth Petal will be released by Penguin Random House/Crown in January 2017.

My thoughts
I have this author's other book The Lace Reader and enjoyed it so I was looking forward to this book as well. The subject matter is something that interests me a lot. I enjoy reading about things happening in Salem especially when they are connected to witches. This book was full of mystery and history - two of my favorite things to read about. There was even a little romance thrown in for good measure. Once I got started on this book I did not want to stop as it was a real page turner for me. I recommend reading this book as it was one of the good ones published this year.
Posted by Angela - Bookaunt at Friday, October 20, 2017