Get Booked by Bridget Tighe - Review 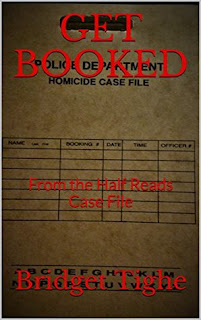 I received this book free from the author. All opinions are mine

About this book
"Get Booked" is the story of Megan McDougal, a passionate, quirky children’s librarian who has returned to her small home town in Montana after mysteriously becoming a soldier’s widow and single mother. She is finding new joy in life with family, and her hilariously likeable friends in the Half Reads Book Club.

When Megan’s neighbor, a crazy cat lady, is murdered, this unlikely bunch of fun-loving readers jump at the opportunity for gossip and a good mystery. The generously vivacious Phyllis, an emergency services dispatcher, acts as the group’s link to law enforcement and no one knows more about what really goes on. The gallant and roguish Sergeant Tim Sayer has his eye on Megan, and not just because she is poking around for evidence and suspects, but is she ready? Or is the kind and quiet mailman Toby, more likely to be the one who delivers?

Could raging Ralph Swenson have finally gone too far, offing his neighbor for letting her cats use his yard as a litterbox? What about the cat burglar who has been sneaking into homes and stealing without leaving a single mark or fingerprint? Then there’s the ex-boyfriend, Richard, seeking to reignite passions only to be spurned. The nephew living in the basement has been acting suspiciously, carrying needles, disappearing - could he have done her in when she tried to kick him out?

Excitement and intrigue drive this eccentric book club to leave their comfort zone in search of the killer, and only their unique resourcefulness and peculiar perseverance get them clues, but everything is dead ends. Pressure mounts and the reality of danger is real, with a killer loose and the possibility that the illusive burglar is really the murderer searching for another victim.This story, set in rural Rutley, Montana,stands out from other cozy mysteries because it is sexy, thrilling, and hilarious with one unexpected twist after another.

Meet the author - Bridget Tighe
I'm an optimist. This also means I'm not a huge fan of reality. This is why I'm so good at creating my own reality. Books are ideal for this endeavor, and I love them...ahhh.
I live in rural Montana with my 3 toy poodles, 2 cats ... oh, and my family too. I absolutely love the outdoors- camping, fishing, hiking, bonfires.

I have been writing for over ten years in many genres. I have a fantasy novel in the works. And it's been in that state for years. Right now, I'm working on cozy mystery writing and I love it. I like to throw a lot of humor and some awkward adventure into my stories. I create characters I think people can relate to, people you might think you've known before.

I was a Military Police in the U.S. Army a long time ago. I've also worked in a couple of prisons- yuck! And a correctional addictions treatment facility. I've also worked as an emergency services dispatcher so I have a bit of real knowledge that I can use to add authenticity to my mysteries.

I'm getting older and I'm tired of dilly-dallying around. I'm a writer, so I write. I write what I love and it's all the better if someone else loves it too.

My thoughts
This is the first book in this series and the first book I have read by this author. She did not disappoint me in this fun mystery. First you get an inside look at the world of libraries which I found interesting then you get to meet some fun characters. I thought the characters were very likable and "real". This mystery had a bit of humor in it which I thought was nice. The author also did a good job of keeping me guessing until the end. All the makings of a good story
Posted by Angela - Bookaunt at Sunday, October 01, 2017