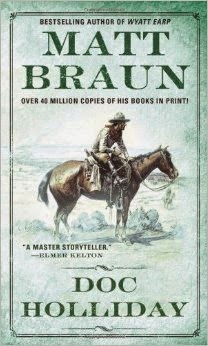 Synopsis:
He came from the American South, a gentleman by breeding, a dentist by training, a gambler by vocation. But as Dr. John H. Holliday, a man fleeing his tragic past, drifted across the West, living among some of the roughest men on the frontier, word spread quickly he never walked away from a fight, and he never drew too late.Now, from Dodge City to Denver and Cheyenne, from boomtown to sinkholes, "Doc" Holliday was driven by the demons of his past, a skilled gambler and a seasoned mankiller--his name was known and feared long before the O.K. Corral. The story of a man who spoke softly and carried a lightning gun, Doc Holliday is Matt Braun's extraordinary chronicle of the West's most complex and legendary figure.

My review:
I have been a fan of Doc Holliday ever since I have seen the movie Tombstone and Val Kilmer played him. When I saw this book I just had to have so I could learn more about the infamous gunslinger. I am glad I bought it and finally picked it up to read. This was a very good telling of his life story. There was not a lot I knew about him other than his part in Tombstone and that he used to be a dentist. Matt Braun had a way of writing this story so you felt as if you really knew the man behind the legend. After reading this book I actually felt bad for Doc and all that life dealt him. Even though he was a gunslinger I have a lot of respect for him. He never killed a man who did not try to kill him first, he did not like cheaters and would call you out if he thought you were cheating. I recommend this book to historical fiction fans.
Posted by Angela - Bookaunt at Tuesday, March 24, 2015