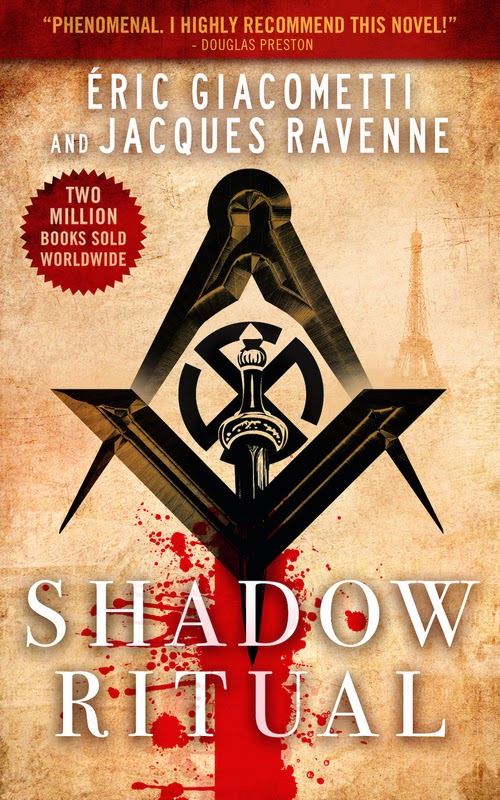 Synopsis:
Ritual murders. Ancient enemies. A powerful secret. Two slayings—one in Rome and one in Jerusalem—rekindle an ancient rivalry between modern-day secret societies for knowledge lost at the fall of the Third Reich. Detective Antoine Marcas unwillingly teams up with the strong-willed Jade Zewinski to chase Neo-Nazi assassins across Europe. They must unravel an arcane Freemason mystery, sparked by information from newly revealed KGB files. This electrifying thriller about the rise of extremism is the start of a bestselling series that has sold two million copies worldwide.

Review:
I thought this was a good book with a lot of twist, turns and action to keep the story moving along at a good pace. I enjoyed how the two secret societies played a part in this story. The authors did a good job with all the details of the story so you did not miss anything. If you are a fan of Dan Brown's books then you will also enjoy this one. I found myself wanting see what was going to happen next. All in all a good book to keep you engrossed the entire time you are reading it.

About the Author:
Jacques Ravenne is a literary scholar
who has also written a biography of the Marquis de Sade
and edited his letters.
He loves to explore the hidden side of major historical events.

Eric Giacometti was an investigative reporter
for a major French newspaper.
He has covered a number of high-profile scandals
and has done exhaustive research in the area of freemasonry.

About the Translator:
Anne Trager loves France so much she has lived there for 27 years and just can’t seem to leave. What keeps her there is a uniquely French mix of pleasure seeking and creativity. Well, that and the wine. In 2011, she woke up one morning and said, “I just can’t stand it anymore. There are way too many good books being written in France not reaching a broader audience.” That’s when she founded Le French Book to translate some of those books into English. The company’s motto is “If we love it, we translate it,” and Anne loves crime fiction, mysteries and detective novels.
***
Follow Le French Book on Twitter  | on Facebook
Sign up to receive their latest news and deals.
Buy the book | on Amazon  | Barnes & Noble  | Indiebound  | upcoming on Apple + Kobo

Exclusive content …
5 Freemason Facts and a lot more you never knew about secret societies and the world around us.
Best-selling authors share their research and inside knowledge.

GET THE FACTS BY CLICKING HERE!

Jacques Ravenne is the co-author of a bestselling French thriller series that has sold 2 million copies worldwide and is translated into 17 languages. This month the series, which he writes with Eric Giacometti, is making it debut in English with Shadow Ritual, an electrifying thriller about the rise of extremism. Eric is also an investigative report who has covered a number of high-profile Freemason scandals, and Jacques, himself a Freemason, is also a literary scholar who has written a biography of the Marquis de Sade and edited his letters. Together they have created this very successful series about a French Freemason cop. Douglas Preston calls Shadow Ritual “phenomenal.” Here Jacques talks about the true story that inspired this exciting story.

Shadow Ritual was inspired by a little-known episode that occurred when the Nazis occupied France between 1940 and 1944. In an operation that was prepared in advance in great detail and began the day the Germans entered Paris, specialized commandos pillaged the French Freemason headquarters, stealing most of their archives. The Nazis requisitioned two centuries of French masonic memory—from 1740 to 1940—and sent all the documents to Germany.

Why were the Nazis in such a hurry to get their hands on these archives? Remember what the Third Reich believed they were fighting against: democracies corrupted by two deadly diseases: Judaism and Freemasonry. So, stealing the Freemason archives from France, the country that exported revolutionary ideas to the entire world, was a way to finally prove that for two centuries a conspiracy existed against the German people and nation. One can imagine with what relish Nazi ideologists threw themselves into these archives. And of course, any worldwide conspiracy led by Jews and Freemasons must be about occult powers. For many Nazi adepts, the power of the Freemasons came from the knowledge and practice of esoteric secrets. They wanted to possess those secrets.

This is one of the little-known sides of Nazi ideology: its fascination with the occult and its quest for esoteric secrets. While National Socialism, with its military strategy and concentration camps, pretended to be rational and methodical, a large number of upper echelon Nazis wallowed in strange and nebulous esoteric theories. Expeditions were sent to Tibet to find the supposed true origin of the Aryan race, digs were made in the south of France to look for the Holy Grail. No wonder the Nazis were fascinated by French freemason archives.

Those documents, which Eric and I have explored, hold the signatures of the likes of Voltaire and Benjamin Franklin. And for many, they must hold some Great Secret: the secret of the All Powerful. A hidden secret our novel Shadow Ritual  set out to find.