The Prince's Doom by David Blixt - Guest Post and Giveaway 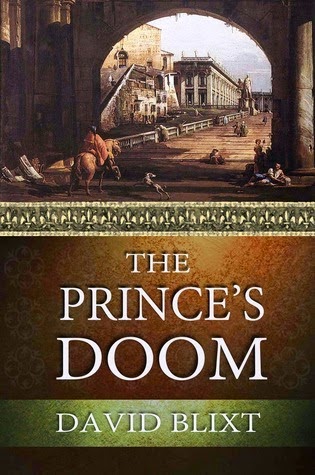 Heart Breaking
This one was hard.
The Prince’s Doom my seventh novel, the fourth in this series. I’ve got the writing process down now, and I’m a far stronger writer than I was when I started. My structure is better, more intricate. My twists aren’t too clean, my characters are less perfect, more human.
So why was this one so hard?
Anna Belfrage just wrote a piece about finishing an eight-book series and not wanting to let go. I wonder if that was it – this isn’t the end of the series, but it’s certainly a watershed moment. Bodies start dropping, and several leads we’ve had since the start aren’t with us by the end. Major and minor players, historical characters or fictional ones. No one is safe.
Is that the reason this was so hard? That I don’t want to let these people go? No, that isn’t the reason. That part was – well, fun isn’t the right word. But there have been moments when I’m writing a well-earned shock that I’m smiling and pretending I’m the reader, full of rage and horror and awe. I’ve had that feeling only a few times, and I treasure it. The chess scene in Dunnett. Arthur walking into the temple of Isis in Enemy Of God. Ned Stark’s fate. These are wonderful shocks where you truly don’t know what’s going to happen next. The curses and threats I’ve gotten from longtime fans have been rewarding. It’s not Red Wedding territory, but it is nonetheless gratifying to find so many people caring so deeply for characters I’ve been writing for fifteen years.
So that’s not it.
What about the pure size of it? Longest thing I’ve written by far, and richest, with the most detail yet a lack of exposition – all of that was done earlier, there’s hardly any need for it anymore. The world is built, and I get to play. So no, it wasn’t that.
It’s that this one is special.
There are books you write because you have an idea you can’t get out of your head. Or because you’re having fun. Or because you’re on a deadline.
The Prince’s Doom is all of those. But it’s also the other kind of book, the rare one.
The one where you have something to say.
But if you don’t say it just right, not too blunt but also not too oblique, you’ll ruin it. Too on the nose, no one will care. Too abstract, no one will get it.
I long ago shed the need to be in my writing. My books are not about me – I am not a character in them, for all my nods to this friend or that character I’ve played. But there are rare books that speak more about who I am in their content than any character ever could.
The Star-Cross’d series has always been near to my heart, and I’ve always been proud of the story I’m telling. But writing last year and the year before, I’ve felt more and more of myself slipping into this book. Not me as a person. Not me as in my thinking, my mind.
No, I gave this book my heart.
And then I broke it.
The series is called Star-Cross’d for a reason. Things go wrong. It’s heartbreaking.
That must be why it was so hard.

a Rafflecopter giveaway
Posted by Angela - Bookaunt at Tuesday, March 24, 2015