The School of Night: The William Shakespeare Detective Agency Book One by Colin Falconer 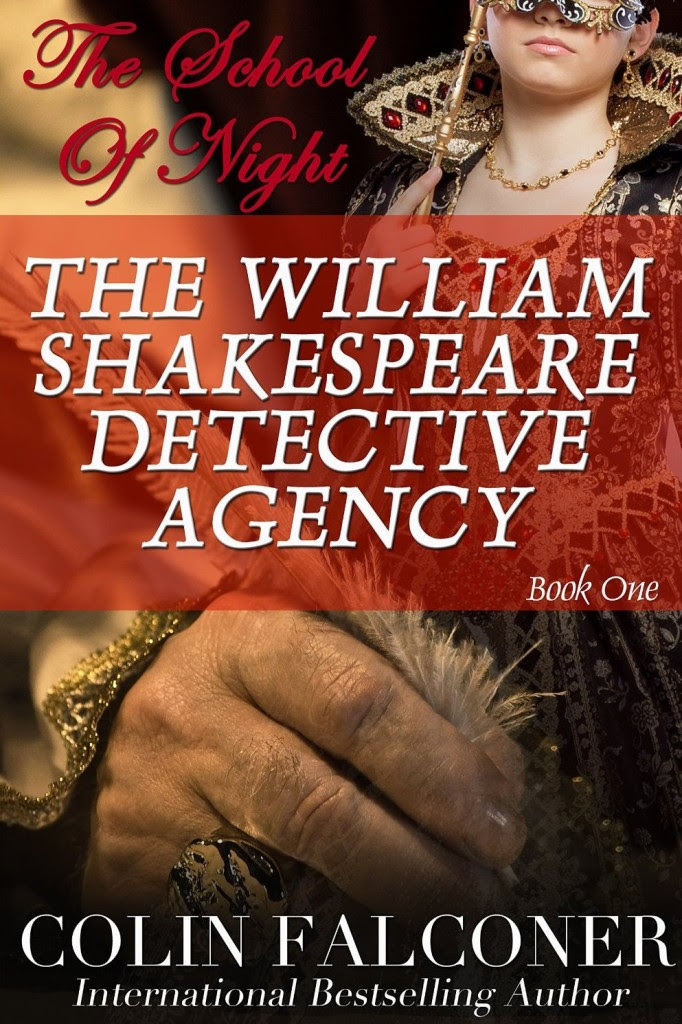 The School of Night by Colin Falconer
The William Shakespeare Detective Agency Book One
ISBN: 9781621252139
Paperback

Synopsis:
"My name is William Shakespeare. No, not that Shakespeare; and no jests please, I’ve heard them all. I’m the other one, the ne’er do well cousin, the loafer, known to family and friends as the dunce, the one who could not recite Cicero or Horace, who could never be as good as his clever cuz, the one who has just come to Bishopsgate from Stratford with silly dreams in his head and a longing to make something more of himself than just a glover’s handyman.”

What he finds in London is Lady Elizabeth Talbot, who is willing to pass a few shillings to this blundering brawler if he will help her find her husband. Poor William does not realize the trail will lead to the truth behind the death of Shakespeare’s great rival, Christopher Marlowe - or to a lifelong love affair with a woman far above his station.

Each book tells the story of William’s adventures as England’s first gumshoe, set against turbulent Elizabethan politics; of his romantic pursuit of the impossible Elizabeth Talbot; while charting the career of his up and coming dramatist cousin, the bard of Stratford, but just Will to his family.


Review:
I just received this book yesterday so I just got started on reading it. I have to say that the first pages of this book are great. I can see that the author did a good job in developing the characters. I can't wait to see what happens with the rest of the book. I will be posting a full review at a later date. At this time though I would recommend this book to mystery fans as it is pulling me in. 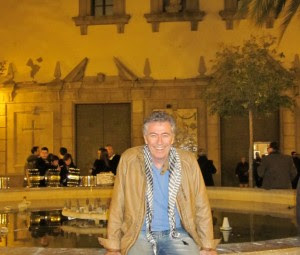 Born in London, Colin first trialed as a professional football player in England, and was eventually brought to Australia. He went to Sydney and worked in TV and radio and freelanced for many of Australia’s leading newspapers and magazines. He has published over twenty novels and his work has so far been translated into 23 languages.

He travels regularly to research his novels and his quest for authenticity has led him to run with the bulls in Pamplona, pursue tornadoes across Oklahoma and black witches across Mexico, go cage shark diving in South Africa and get tear gassed in a riot in La Paz.

He currently lives in Barcelona.

Monday, March 16
Interview & Giveaway at View From the Birdhouse

Thursday, March 19
Interview at Becky on Books
Spotlight at What Is That Book About

Friday, March 20
Spotlight at To Read, or Not to Read

Tuesday, March 24
Review at It's a Mad, Mad World


Excerpt:
I could hear, I could even see a little, but I could not move. I lay face down in the Bishopsgate alleyway - and if you have seen a London street in those times, you will know that no one lies in one unless they utterly insensible. The other sense I had lost was my sense of smell, which was a mercy, as I could see the dogs chewing gristle and ordure from a rubbish pile a few feet away.
I imagined they would start on me next.
I tried several times to get up but found that I could not. My whole body was numb and my muscles would not obey me. It was even a labour to breathe. I coughed and spat out something. I hoped it wasn’t a part of me that I needed to live.
I did not know how long I had been lying there. I heard someone trudging towards me through the mud and I supposed someone had come to finish me off.
They knelt down and held a lantern to my face. Even that hurt.
‘It’s the oaf, my lady.’ The oaf. They had beaten me senseless, perhaps broken every bone in my body, and nothing hurt as much as them calling me that.
The oaf.
Why, because I do not have ink stains on my fingers? Because I cannot conjugate Latin? Prick me do I not squeal? Cut me do I not bleed? I attended the grammar school, I have read Ovid, you peasant.
The oaf.
‘Is he dead?’
‘No madam, he breathes. But I do not like the look of him.’
‘Well he was never the prettiest man I ever saw, I dare say it does not matter. Can you lift him?’
‘He is too heavy for me.’
I knew I was in a bad way for I could have sworn the woman’s voice belonged to Lady Elizabeth Talbot.
‘I believe he may be dead.’
‘Well, stick a clothes pin in him or something. See if he squeals.’
‘I do not have a clothes pin, my lady.’
‘Oh well, I’ll do it myself.’ She meant to do it, too. I managed a groan; not much of one, but the best I could manage and at least she put away the pin. She stared at me in the glow of the lamp and I saw her blanche. So, it must be bad. ‘What's this, William? Some other tart been beating you up? For such a big man you really are hopeless in a fight, aren’t you?’
I wanted to tell her that there were two of them and that they had come up at me from behind. I wanted to tell her that it was not a fair fight. But even if I had possessed the power of speech I do not think she would have believed me.
My face lay in a pile of ordure a few inches from this gracious lady’s feet. Such lovely shoes, too. Calf leather. Grey. Expensive. I was afforded a glimpse of her ankles. I am not sure that you know this, but ankles were much prized in my day, more so than breasts. Oh every woman thrust them in your face back then, like puddings, here want to try mine?
But ankles!
A well turned ankle was a thing of joy, only God could craft such a fine achievement. And Elizabeth Talbot had the finest ankles I had ever seen in my life.
‘Look at you, William. What’s the point of such a fine physique if you can’t fight?’ She said it as if it was my fault, as if I had been negligent in my grooming. ‘Can you move him?’ she said to her man Peter.
‘He’s too big for me.’
Peter and two others - I assumed one was the ostler, the other must have been a hired man - tried to help, and I would have liked to assist them but I was completely insensible. And then, to my astonishment, the fine lady Talbot got down on her knees and helped them lift me to my feet. The fragrance of rosewater and patchouli in that stinking lane was utterly unexpected. I felt her hand touch my face.
‘My poor champion,’ she murmured and I smiled in pleasure and my lip started bleeding again.

When we got back to Saint Helen’s she had her woman put me in the bath while she supervised the process from the doorway. The girl had giggled when she stripped off my clothes for I have unusually large feet. Her ladyship slapped her around the head and told her if she continued to behave lewdly she would do the job herself.
By the time they eased me back into bed I had the filth of London washed off me and my clothes, on her command, burned in the stove. I lay there shuddering; whatever they had hit me with, it must have been a piling that anchored one of the Queen’s warships for I still could not feel much of my body, though I had thankfully recovered use of my legs. Elizabeth Talbot stood over the bed and drew the blanket up to my chin with a sigh.
Everything hurt. Even the breeze from the window hurt.
‘How did you know where I was?’ I said.
‘I had a man follow you.’
‘Really? What man?’
‘A fellow off the street. I paid him a few coins to follow you about.’
‘Why?’
‘I didn’t trust you. I thought that I followed you, you would lead me to my husband.’
‘Your husband? I thought he was your brother.’
‘I lied.’
‘And you say that you don’t trust me?’
‘He saw you follow the lady when you left the inn.’
‘That was no lady.’
‘Did you intend commerce with her?’
‘She was a trollop.’
‘Most men like trollops.’
‘I am not most men.’
‘So it appears. Anyway, my man followed you. He saw you getting beaten. He saw it all, he said it was the girl’s mother that did it, an old lady with a cane.’
I was about to protest, then I saw that this was some kind of joke.
She poured some sweet red wine in a flask and she held it to my lips, then wiped the residue with a linen napkin. Really this was the life. Perhaps I should get beaten up more often.
‘Do you still think you cannot trust me?’
‘I don’t know. What were you doing back at the tavern?’
‘I wanted to know why the tapster said he had seen me with your husband or your brother or whatever he is. I noticed the girl’s expression when I mentioned his name and then she snuck out. So I decided to follow her.’
‘Did you find out who she was?’
‘I never had the chance. She turned up an alley and then gave a sort of whistle and the next thing I knew half a dozen ruffians set on me.’
She sat on the bed and put her hand on mine, a rather tender gesture I found oddly comforting. ‘I’m sorry I got you in so much trouble,’ she said.
She tucked me into the bed, like I was a sickly child, blew out the candle and slipped into bed beside me, naked. Well no, of course not. That was just my fevered brain.
What happened next was that I heard the door shut gently behind her.
I closed my eyes. I wondered if cousin Will had missed me or if he had just shrugged and forgotten about me. In the meantime I was disposed to make the most of clean linen sheets and a wide bed. It seemed some recompense for the bruises and trouble I had sustained on the good lady’s behalf.
I dozed pleasantly for a while until something woke me. It was dark, just a candle burning in the room and I guessed, from the pleasant smells and the rustling of skirts that it was her ladyship. I decided to keep my eyes shut and feign sleep. To my astonishment I felt her hair tickle my face and her lips lightly brush my forehead.


Then I heard her swish from the room. After that I did not sleep much. I felt movement beneath the sheets and with some relief I discovered that I was recovering the use of at least some of my parts much quicker than I had thought I would.
Posted by Angela - Bookaunt at Friday, March 27, 2015