Garden of Death by Chrystle Fielder - Spotlight and Giveaway 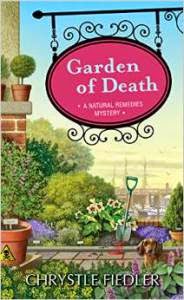 Synopsis:
PHYSICIAN, HEAL THYSELF?
Murder is unearthed when an outspoken surgeon turns up dead in Willow McQuade’s medicinal herb garden.
When a local doctor is found dead in Willow McQuade’s medicinal garden, she must find the killer to clear her boyfriend’s name in this third clever book in the Natural Remedies Mystery series.
Dr. Willow McQuade, owner of Nature’s Way Market & Café, has put the finishing touches on a new medicinal plant garden for Greenport’s annual Maritime Festival and is ready for the festivities to begin. But it’s not all flowers and sunshine at the grand opening, when Willow discovers the body of another contestant, Dr. Charles White, face down in her garden.
Willow’s hunky boyfriend, Jackson Spade, immediately becomes a suspect due to a recent fight with Dr. White. Willow knows she has to remedy the situation, but it won’t be easy with the other applicants’ vendettas and vandals wrecking her garden at every turn. And when she finds buried treasure in her garden that just might belong to the legendary Captain Kidd, the stakes become even higher. Was Dr. White searching for that treasure? Did someone kill him to get to it first? With the help of Jackson and her eccentric ex-boyfriend, Willow follows the clues to uncover the truth that someone wants buried…
But can she dig up enough evidence before she becomes the killer’s next victim?
About the author:

I love natural remedies and I’ve been using them for as long as I can remember. When I was growing up, my mother practiced natural cures such as tea bag baths for sunburn, homeopathic remedies for colds and allergies, arnica oil for sprains and bruises and, of course, chicken soup with garlic was always a staple.
My interest in natural remedies continued after I graduated from Boston University with a degree in communications and subsequently dabbled in various vocations including advertising and television production in Hollywood. In 1998 I moved back to my hometown, Greenport, NY and set up my own writing business. I’d always wanted to be my own boss and write full-time.
My focus was, and is, health, and in particular alternative medicine which includes natural remedies. As a freelance journalist, I’ve written about natural cures for Natural Health, Mother Earth Living, Spirituality & Health, and Vegetarian Times, as for over five years I was the Good Nature columnist for Remedy magazine.
You can see my writing work here: https://chrystlefiedler.contently.com
Author Links
Purchase Links
Amazon

a Rafflecopter giveaway
Posted by Angela - Bookaunt at Sunday, March 22, 2015