A Christmas Peril by J.A. Hennrikus - Guest Post and Giveaway 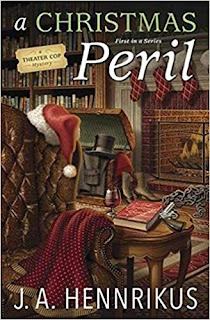 About this book
When Edwina “Sully” Sullivan’s life imploded, she left behind her job on the police force and her unfaithful husband to start a new life as the general manager of her hometown theater, the Cliffside Theater Company. For five years, she focused on budgets instead of crimes and kept the Cliffside running alongside its mercurial artistic director.

But when her best friend is arrested for killing his father, the rich and powerful Peter Whitehall, no one is looking for another suspect. So, in between keeping A Christmas Carol on budget and Scrooge sober, Sully dusts off her investigative skills to find a killer. Her two lives collide when her ex-husband gets on the suspect list and she’s forced to confront her past in order to save her present.

Meet the author - J.A. Hennrikus
J. A. Hennrikus is the author of the Theater Cop Mystery series. As Julianne Holmes, she writes the Agatha-nominated Clock Shop Mystery series for Berkley Prime Crime. Hennrikus blogs with the Wicked Cozy Authors, is on the board of Sisters in Crime, and is a member of Mystery Writers of America. She is also an arts administrator who lives in Massachusetts. Visit her online at www.JHAuthors.com.

She tweets under @JulieHennrikus, and am on Pinterest and Instagram, and have a page on Facebook. I also blog on Live to Write/Write to Live, and I blog on Killer Characters on the 20th of each month.

A CHRISTMAS PERIL is the first novel in my Theater Cop series. In this series, Sully Sullivan is an ex-cop who decided if she couldn’t do the job, she wouldn’t wear the badge, so she moved back to her hometown, and became the general manager of a theater company, the Cliffside Theater Company. When her friend Eric is accused of killing his father, she dusts off her badge to find the real killer. The theater is in the middle of rehearsals for what should be their big fundraiser for their summer season—their production of A CHRISTMAS CAROL. They hired a television star to play Scrooge, and it isn’t going well.
Choosing a play as the background of the book wasn’t difficult. My favorite story of all time is A CHRISTMAS CAROL. Favorite might be too mild a term. I am obsessed with A CHRISTMAS CAROL. A few years ago, I wrote a series of blog posts [https://jahennrikus.com/?s=A+CHRISTMAS+CAROL] critiquing twenty-five different movie and television versions. I didn’t talk about the theatrical versions I’ve seen, which have been numerous as well.
The idea of redemption—that’s what I love most about A CHRISTMAS CAROL. Even though I know the story, the scene when Scrooge longs to be able to change his choices, that scene always gets to me. The idea that there may not be enough time to drink from the milk of human kindness, to realize that love is what matters, that scene always gets to me. How effective that scene is—that’s how I judge my CHRISTMAS CAROLS. Has Scrooge’s journey been enough to make the redemption believable? Do I want Scrooge to be redeemed?
Do I have a favorite CHRISTMAS CAROL? I saw Patrick Stewart do his one man version on stage, twice. Hard to top that in a lot of ways. But there are so many film and television versions to choose from. George C. Scott jumping on the bed, Christmas Carol Albert Finney wearing the Father Christmas costume singing “Thank You Very Much” Scrooge, Vanessa Williams in her Christmas concert Divas Christmas Carol ,  Tori Spelling visiting her niece and nephew Carol Christmas, Ciciley Tyson returning the lamp Ms Scrooge, Mr. Magoo’s curtain call. Mr. Magoo's Christmas Carol I’ve only scratched the surface.

Another great reason to use A CHRISTMAS CAROL in A CHRISTMAS PERIL? Mysteries are about redemption, and justice. Is Sully Scrooge? Maybe a little bit. Helping her friend, and coming to terms with her past, help Sully embrace the joy in her life a bit more.
There’s nothing wrong with that, is there? 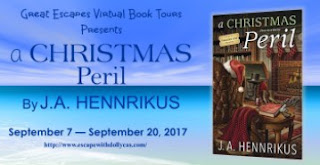