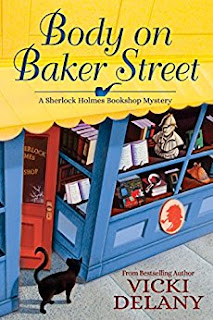 About the book
Gemma Doyle and Jayne Wilson are busy managing the Sherlock Holmes Bookshop and Emporium on Baker Street and adjoining Mrs. Hudson’s Tea Room in anticipation of the store’s upcoming book signing with the illustrious Renalta Van Markoff, author of the controversial Hudson and Holmes mystery series. But during the author Q&A session, dedicated Sherlockian Donald Morris verbally attacks Renalta and her series for disgracing Sherlock’s legacy, only to be publicly humiliated when the author triumphantly lashes back and gains the upper hand. That is until Renalta collapses on the table―dead.

Donald insists he didn’t do it and pleads to his friends to clear his name. Fortunately, Gemma and Jayne have no shortage of suspects between author’s bullied personal assistant, her frustrated publicist, the hapless publisher, a handsome rare book dealer, an obsessively rabid fan, and a world of other Sherlock enthusiasts with strong objections to Renalta’s depiction of the Great Detective. It’s up to the shrewd sleuthing duo to eliminate the impossible and deduce the truth before the West London police arrest an innocent man in Body on Baker Street

Meet the author - Vicki Delany
Vicki Delany is one of Canada’s most prolific and varied crime writers and a national bestseller in the U.S. She has written more than twenty-five books: clever cozies to Gothic thrillers to gritty police procedurals, to historical fiction and novellas for adult literacy. Under the name of Eva Gates, she writes the Lighthouse Library cozy series for Penguin Random House. Her latest book is Body on Baker Street, the second in the Sherlock Holmes Bookshop series from Crooked Lane.

Vicki is the past president of the Crime Writers of Canada. Her work has been nominated for the Derringer, the Bony Blithe, the Ontario Library Association Golden Oak, and the Arthur Ellis Awards.