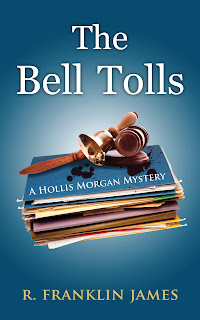 About the book
Hollis Morgan has survived imprisonment, received a pardon and persevered to finally become a probate attorney. Tough as she is, her newest case will further test her mettle. She discovers her client, Matthias Bell, is a deceased blackmailer whose last wish was to return the damaging documents letting his victims off the hook. It falls to Hollis to give them the good news. But it becomes apparent that Bell was murdered, and the victims of “Bell’s tolls” are now suspects.

Hollis’ white-collar criminal past has left her with keen survival instincts. A gifted liar, she knows a liar when she sees one. A lot of people in this case are lying and one is a killer.

On top of that, she’s also representing a dying stripper, a wealthy widow whose estranged daughter spurns her attempts at reconciliation, but whose husband sees the potential inheritance as mending all wounds.

Clients aside, Hollis is defensive and wary. Her mother, who hasn’t spoken to her for years, needs a kidney, and Hollis is a match, but neither are ready to put away the past. With Hollis’ fiancé and emotional support off on an undercover mission for Homeland Security, she must count on her own survival instincts. She is swept along on an emotional roller coaster as her absent love and her family’s coldness take their own toll.

Work is her salvation. The specter of a killer keeps her focused. Hollis has always had to rely on her wits, but now she finds that others who don’t have her well-being in mind are relying on them as well.

Book 5 in the Hollis Morgan Mystery series, which began with The Fallen Angels Book Club.

Meet the author - R. Franklin Jame
R. Franklin James grew up in the San Francisco Bay Area and graduated from the University of California at Berkeley. From there she cultivated a different type of writing—legislation and public policy. After serving as Deputy Mayor for the City of Los Angeles, under millionaire Richard Riordan, she went back to her first love—writing, and in 2013 her debut novel, THE FALLEN ANGELS BOOK CLUB

was published by Camel Press. Her second book in The Hollis Morgan Mystery Series

, was followed by THE RETURN OF THE FALLEN ANGELS BOOK CLUB

R. Franklin James lives in Northern California with her husband.

Books in This Series

Being a mystery writer has a lot of advantages. For one, you’re allowed to ask questions that would ordinarily draw curious, perhaps even apprehensive stares from strangers, but mention you’re a mystery author and most people will nod with sympathetic understanding.

When plotting a murder an author must consider those elements required by the law: means, motive, opportunity and one more critical element, caring.

Means is fairly simple. First, is your mystery a contemporary story? Means will define the weapon or killing method you use to bring about the victim’s demise. Researching the means may involve researching the right poisons, where to buy an AK47, how to take over an airplane, or how much arsenic can you add to go undetected in coffee. Readers these days are very sophisticated, there’s always someone out there who will protest if the author hasn’t done their research.

For instance, if your gun is a revolver, it’s not going to have a clip. If your poison is strychnine, its effect is instantaneous and the victim is not going to be able to dial 9-1-1.

As an author you want to write the best book you can. You want to write so that the reader forgets they’re reading a book, and they won’t get pulled out because your facts don’t hold up. They are there with you on all the pages to the end .

Then there is motive.

The “why” of a murder may be detached (a contract kill) or close (a family dispute) and everything in between. In a traditional mystery we’re not referring to persons involved in accidents or victims of happenstance. Nor are we talking about thrillers. Clearly terrorists kill without knowing their victims, but typically in most mysteries as in real life, it’s personal. In a mystery the villain usually kills for: revenge, passion, greed, and even expediency—the list can go on and on. The rationale of a murderer’s motive goes to their psyche, and that is as individual as are people. Even the most justified murderer has to rationalize why killing another human being is the only recourse left. As an author, the building of the villain’s motive is critical to keep the reader engaged and the plot believable. If the motive isn’t strong, the story is likely boring and the reader will not finish the book.

It is easy to see that the “how” and the “why” of the plot are not mechanical logistics, but rather the basis for getting inside the head of the villain. It is not only the protagonist that must carry the story, a credible and formidable villain must also partner with the protagonist to lead the reader page by page to its irrevocable conclusion.

The villain must have the opportunity to commit the murder. Here setting and tone are ingredients that make up fabric of opportunity. First, setting: does the murder take place in a home or in a warehouse basement? Second, tone, is the dialog or descriptive language light and comedic, or menacing and dark. Setting and tone set the stage for the reader to “be there” with the villain and the hero as well as the victim. It is through the setting and tone that the reader first determines what kind of mystery to expect and whether or not the author can deliver on the promise of a good read.

More than any other plot factor, opportunity will frame your mystery sub-genre. Opportunity paints the background for a humorous, romantic, cozy or traditional mystery.

Regardless of the sub-genre, it is critical that the killer’s “opportunity” isn’t so narrow that only one character could have committed the crime. There should enough questions in the mind of the reader that at least one other character could be a viable candidate for the villain. On the other hand, it is also important that the murderer not come from out of the blue. The writing should have a path of clear, if not ambiguous clues, that point the reader to an ending that is not obvious, but satisfies because it requires the reader to follow in the footsteps of a detective.

Predictability is the death knell for a mystery.

Finally, the fourth plotting component is writing characters that readers care about. This is key not only for mysteries, but for any work of fiction as well. Shallow or stereotyped characters are not sympathetic, they are boring. An antagonist with some redeeming qualities is a complex character that enriches the storyline, in a like manner a flawed protagonist will keep readers turning the pages of your mystery.

Means, motive, opportunity and caring: four elements to keep in mind when you are plotting a “can’t put down” murder mystery.