A Shape on the Air by Julie Ibboson - Excerpt and Giveaway 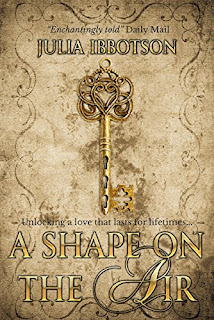 
BOOK BLURB:
Unlocking a love that lasts for lifetimes … and beyond …

Dr Viv Dulac, a lecturer in medieval studies, is devastated when her partner walks out (and with her best friend too) and it seems that she is about to lose everything. Drunk and desperate, her world quite literally turns upside down when she finds herself in the body of the fifth century Lady Vivianne. Lady V has her own traumas; she is struggling with the shifting values of the Dark Ages and her forced betrothal to the brutish Sir Pelleas, who is implicated in the death of her parents. Haunted by both Lady Vivianne and by Viv's own parents' death and legacy, can Viv unlock the mystery that surrounds and connects their two lives, 1500 years apart, and bring peace to them both? Can the strange key she finds hold the truth? A haunting story of lives intertwining across the ages, of the triumph of the human spirit and of dreams lost and found.

Meet the Author - Julia Ibbotson
Award-winning author Julia Ibbotson is obsessed with the medieval world and concepts of time travel. She read English at Keele University, England (after a turbulent but exciting gap year in Ghana) specialising in medieval studies, and has a PhD in linguistics. She wrote her first novel at 10 years of age, but became a teacher, lecturer and researcher, and a single mum. Julia has published four books, including a children’s book S.C.A.R.S (a fantasy medieval time slip), a memoir, and the first two novels of her Drumbeats trilogy (which begins in Ghana). Apart from insatiable reading, she loves travelling the world, singing in choirs, swimming, yoga, and walking in the English countryside.

Her recent release is A Shape on the Air

Lady Nymue, her mother, is rising from the mere like a spirit: tall, slow like a dream, over-gown falling in slim folds from her waist. Vivianne sees her in a haze of mist, like magic, an illusion. She feels it, that enchantment, and it is enfolding her, but making her shiver, too. Her life-giver, robes dry despite the water, is coming towards her as she stands anxiously on the bank, waiting impatiently, calling out urgently, hopping from one foot to the other, tangling her feet in her earth-sweeping kirtle, longing to rejoin her playmates who are chasing around the village pretending to be Roman soldiers. Her mother, reaching out a hand to her, is shaking her head, but laughing. Be more patient, my little Lady Vivianne, she says, I have not completed my rituals, but let me wrap you in my cloak, for I must return to the mere. But she is only a little girl and something is making her feel cold, frightened. No, she calls, sticking out her lower lip, I want to play! I want to be Honorius this time! They promised! Eleanor will play my wife - or maybe my lady servant.

Her mother is ruffling her soft curls. Well, then, she smiles, I will return later to finish. She is lifted onto her mother’s horse, in front, held close. Dry, warm, comforting. Riding

back to the village. Her care-giver is taking her back to play with her friends again. Her mother turns to the special hall which her father, Sir Tristram, called “sacred” and where she is only allowed to go sometimes.

And then, fire, flames, the acrid smell of smoke. Looking across to the great hall, terror strangling her heart, stealing her breath. Running towards the wooden building, through the ash and cinders and the roaring, screaming now, choking. Someone holding her back, pulling her.

Waking up in her little bed. A big red-faced man in the shadows, haloed with a fair unruly beard and thick wild hair, telling her that her parents were dead, burned in the fire. Her mother and her father, both of them. An accident with tallows. She knows those tallows; they are always on the altar in the sacred hall. They are only spoken of in whispers. But this man is speaking in a strange way, loud, too loud, and it seems to her, sneering, as she peers at him through the darkness.

Giveaway
Julia Ibbotson is giving away a PDF copy of ‘Drumbeats’! Terms & Conditions: • By entering the giveaway, you are confirming you are at least 18 years old. • One winner will be chosen via Rafflecopter • This giveaway ends midnight September 29. • Winner will be contacted via email on September 30. • Winner has 48 hours to reply. Good luck everyone! ENTER TO WIN!
a Rafflecopter giveaway
Posted by Angela - Bookaunt at Wednesday, September 20, 2017

Email ThisBlogThis!Share to TwitterShare to FacebookShare to Pinterest
Labels: Pump up your book, Romance