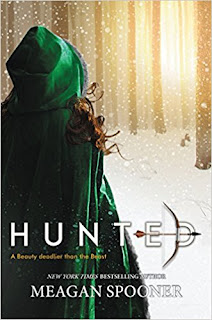 About the book
Beauty knows the Beast's forest in her bones--and in her blood.

Though Yeva grew up with the city's highest aristocrats, far from her father's old lodge, she knows that the forest holds secrets and that her father is the only hunter who's ever come close to discovering them.

So when her father loses his fortune and moves Yeva and her sisters back to the outskirts of town, Yeva is secretly relieved. Out in the wilderness, there's no pressure to make idle chatter with vapid baronessas...or to submit to marrying a wealthy gentleman. But Yeva's father's misfortune may have cost him his mind, and when he goes missing in the woods, Yeva sets her sights on one prey: the creature he'd been obsessively tracking just before his disappearance.

Deaf to her sisters' protests, Yeva hunts this strange Beast back into his own territory--a cursed valley, a ruined castle, and a world of creatures that Yeva's only heard about in fairy tales. A world that can bring her ruin or salvation. Who will survive: the Beauty, or the Beast?

Meet this author - Meagan Spooner
Meagan Spooner is the New York Times bestselling author of the Skylark trilogy and the Starbound trilogy.

She grew up reading and writing every spare moment of the day, while dreaming about life as an archaeologist, a marine biologist, an astronaut. She graduated from Hamilton College in New York with a degree in playwriting, and has spent several years since then living in Australia. She's traveled with her family all over the world to places like Egypt, South Africa, the Arctic, Greece, Antarctica, and the Galapagos, and there's a bit of every trip in every story she writes.

She currently lives and writes in Asheville, North Carolina, but the siren call of travel is hard to resist, and there's no telling how long she'll stay there.

In her spare time she plays guitar, plays video games, plays with her cat, and reads.

My thoughts:
I am not one who normally reads books that are a new version of a fairy tale but there was something about this book that caught my attention. I liked that it was not all sunshine and roses but rather a more grown up and slighty different version of Beauty and the Beast. The author did a good job of developing the characters. I really liked both Yeva and Beast. The way they were described you felt bad for both of them in different ways. Another thing I liked was how at the beginning of each chapter we heard what Beast was thinking - it was like a page out of his journal. The ending was nice and kind of taught a bit of a lesson. I was glad that I picked this book up and gave it a chance.
Posted by Angela - Bookaunt at Sunday, September 24, 2017