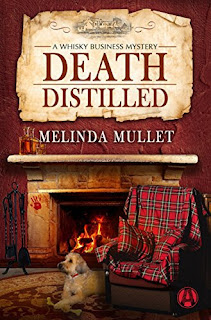 About this book:
Photojournalist by trade, distillery owner by blood, and amateur sleuth by necessity, Abigail Logan learns that murder can’t stay bottled up forever in this charming Whisky Business Mystery.

It’s been three months since Abi Logan last checked in on Abbey Glen, the celebrated whisky distillery she inherited. With her oversize wheaten terrier, Liam, by her side, Abi returns to the quaint Scottish village of Balfour. But her relaxing Highland homecoming takes a stressful turn when she unearths an unseemly bit of village history, welcomes a group of Japanese whisky enthusiasts, and becomes shepherdess to an unexpected flock of sheep—all within the first twenty-four hours. Still, nothing’s more stressful than murder. . . .

Local celebrity Rory Hendricks is the hotheaded, hard-rocking former frontman of the Rebels—and Abi’s girlhood crush. After meeting him in person, Abi can’t say no to anything he asks, like photographing his upcoming show . . . or figuring out who’s trying to kill him. Turns out someone’s been bumping off his old bandmates, with the drummer dead under mysterious circumstances and the keyboardist in a coma following a hit-and-run. Now a series of threatening messages leads Rory to think he’s next on the chopping block. And the band has a devil’s share of broken hearts and bitter disputes in their past, leaving Abi a huge batch of suspects to sift through—all before the killer takes another shot.

Meet the author - Melinda Mullet
Melinda Mullet was born in Dallas and attended school in Texas, Washington D.C., England, and Austria. She spent many years as a practicing attorney before pursuing a career as a writer. Author of the Whisky Business Mystery series, Mullet is a passionate supporter of childhood literacy. She works with numerous domestic and international charities striving to promote functional literacy for all children. She lives in Washington, D.C., with her family.

Guest post:
I’m often asked why I write about whisky? Well for starters, it’s delicious and inspirational. But I also chose to write about whisky because of its remarkable history. Whisky is a product of Scottish grain and spring waters and its production is intimately linked to the fascinating history of the Scottish people themselves. For hundreds of years illicit distilling was a source of comfort and income in hard times, not to mention a soul-satisfying retribution against the harshness of British oppression. Legal or illegal Scots have a passion for their national beverage.

As time went on and the harsh taxes and cultural oppression faded, legitimate whisky production came into it’s own. Today, whisky remains a significant part of the social and economic lifeblood of Scotland and women like Abi Logan from Death Distilled are entering the once male dominated business in droves. While researching for the Whisky Business series I had the pleasure of getting to know many of these women and being inspired by them. They are bringing new life and energy to the whisky business.

Check out these fun facts about Scotland’s most famous export:

2. The Scots are definitely prepared for a post-apocalyptic world. They have more than 20 million casks of maturing whisky on hand. That’s almost four casks for every person living in the country.

3. Whisky collecting is an expensive hobby. A crystal decanter of Macallan Imperiale M whisky sold at auction in 2015 for $628,205! The decanter contains 6 liters of whisky. That’s over $3,000 dollars an ounce.

4. Whiskies aged for more than 30 years can routinely cost thousands of dollars. A 50 year old Glenfiddich retails for $16,000 and a 1926 Macallan for around $54,000. And that is another reason why I write murder mysteries about whisky. Anywhere you find money and passion you will find murder.

5. Even the heavenly hosts enjoy their whisky. Whisky stored in barrels evaporates at roughly 2% per year. In whisky circles this is known as the ‘angel’s share’.

6. Whisky is naturally colorless. The color of a good single malt comes from the wood of the barrel it’s aged in. American oak gives a golden color, while Spanish sherry casks give a richer mahogany color.

7. Enough whisky to float a boat. English taxes on Scottish whisky in the 1700’s and 1800’s were so high that illicit distilling and smuggling were rampant. However, in spite of all the revenue dodging, there was still enough legitimate whisky being sold and consumed to at one point in time to finance the entire royal navy.

8. On the other side of the pond, in the late 1790’s Alexander Hamilton provoked an uprising of Scottish and Irish settlers in America when he began taxing their whisky. President George Washington had to send troops in to quell the rioting and Hamilton was ultimately forced to repeal the tax.

9. Not only has whisky been taken into space to test its reaction to a weightless environment, whisky producer Ballantine has developed a special glass designed for the task. Why take a first class dram aboard if you can’t enjoy it from a space age crystal glass in zero gravity. https://medium.com/space-glass/introducing-the-ballantine-s-space-glass-d7722772f9a7

10. Queen Elizabeth recently launched the largest warship in the British fleet, the HMS Queen Elizabeth. She christened the vessel by breaking a bottle of Bowmore whisky over the hull.

To find out more about whisky old and new check out Death Distilled (coming September 5th). The second book in the Whisky Business series gives a peek into Scotland’s rebellious past as Abi Logan delves into the fate of two notorious rebels; the village’s most infamous bootlegger of old, and the bad-boy of rock and roll who is hiding from a present day murderer in the misty hills above Abbey Glen. 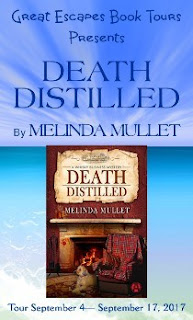