Letters to Juliet by Lisa and Ceil Friedman - Review 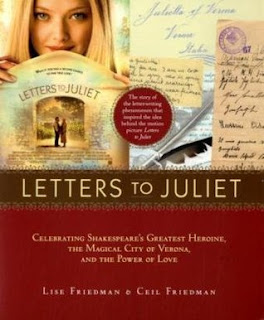 About the book
The enduring legend of Shakespeare’s pair of star-crossed lovers draws millions of visitors to Verona, Italy, each year. But that is just part of the story. Every day, letters, frequently addressed simply, “Juliet, Verona,” arrive in the city. They come by the truckload, in almost every language imaginable, written by romantics seeking Juliet’s counsel. Most of the missives talk of love, of course —love found and love lost, love sought and love remembered. And, amazingly, not one letter goes unanswered.

Letters to Juliet tells the story of these letters and the volunteers who have been writing responses for more than seven decades —volunteers who first acted privately, and who are now sanctioned by the city of Verona as part of the Juliet Club . Featuring more than seventy-five heartfelt letters, this poetic book retraces the history behind Shakespeare’s tale and tours the monuments that have fueled the world's enchantment with Juliet and her Romeo.

Meet the authors - Lise and Ceil Friedman
Lise Friedman, a former dancer with Merce Cunningham, was the editor of the quarterly Dance Ink and is the author of First Lessons in Ballet, Break a Leg!: The Kid's Guide to Acting and Stagecraft, and STC's Alvin Ailey Dance Moves!: A New Way to Exercise. She lives in New York City.

Ceil Friedman is a freelance art historian and translator who writes extensively about contemporary art. She lives in Verrona, where she has collaborated for several years with the Verona City Museums and other institutions in Italy.

My thoughts
I liked this book for the most part. The idea that so many people around the world write letters to Juliet is something I would not have thought about. Some people write asking for help and some write to tell her how much they admire her. It was interesting to hear how there is a group of people that answer all the letters that people write. I liked seeing the pictures of Verona, Italy. The stories of where the idea of Romeo and Juliet came from before Shakespeare wrote his play was also kind of interesting. Parts of that part of the book was a little dry in spots for me but in the same light I did not realize that Romeo and Juliet was possibly based on real people and/or other stories that were written long ago. For me this read fast as I was able to read it in one day and I am glad I took the time to read it.
Posted by Angela - Bookaunt at Saturday, September 30, 2017