Beware the Orchids by Cynthia Hickey - Guest Post and Giveaway 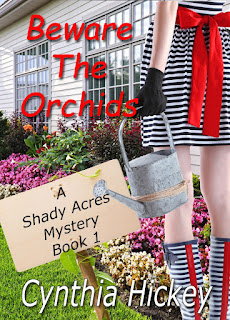 About the book
Ditched at the altar, Shelby Hart tosses down her bouquet, quits her job, and accepts a position as gardener and event coordinator at an upscale retirement community. Her first day on the job results with a dead body in the greenhouse under the orchids and with her as the prime suspect!

Toss in a handsome handyman, quirky characters, and a flirtatious grandma and the fun never stops.

Meet the author - Cynthia Hickey
Multi-published and Amazon and ECPA Best-Selling author Cynthia Hickey has sold over a million copies of her works since 2013. She has taught a Continuing Education class at the 2015 American Christian Fiction Writers conference, several small ACFW chapters and RWA chapters. You can find her on FB, twitter, and Goodreads, and is a contributor to Cozy Mystery Magazine blog and Suspense Sisters blog. She and her husband run the small press, Forget Me Not Romances, which includes some of the CBA’s best well-known authors. She lives in Arizona with her husband, one of their seven children, two dogs, one cat, and three box turtles. She has eight grandchildren who keep her busy and tell everyone they know that “Nana is a writer”.

Funny how this roller-coaster business can tug on someone until it’s either write or die. A bit dramatic, yes, but that’s how most writers feel. Writing is like breathing, or eating.

I started reading at the young age of five and became hooked on words and stories. Being a shy child, I would make up stories to act out, but it wasn’t until Junior High and an English teacher assigned a writing project that I realized how much I loved putting the story to paper. I began writing short stories in which my younger brother was featured as the hero or I’d write a romance featuring me and whatever boy I had a crush on at the time.

When I turned fifteen, I wrote my first “real story” about terrorists taking over a high school. Funny how I have now seen that very plot made into a movie. I couldn’t be stopped after that first “book”. I kept writing, keeping my stories in a notebook, which I unfortunately lost when I married and moved out of state. Then, life happened and I didn’t take up writing again until the age of forty when my children were older and I had time to devote to the art.

In 2007, I published my first cozy mystery, Fudge-Laced Felonies, with Barbour Publishing and haven’t slowed down since. Fifty plus books later, and several genres added to the mix, I have no intentions of stopping this crazy career any time soon. In May of 2013, I left behind the day job and became a full time writer. Scary, but worth every busy minute.

My husband and I now own a small press with over seventy authors on our roster. How do I do it is a question I’m asked over and over. Post it notes and lists! Add that to God’s grace and I can’t see myself slowing down any time soon.

Watch for Kill Shot, the first book in a new cozy mystery series!