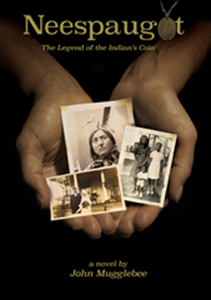 About the book
Melba Blue Jay, sixteen, scrambling up a snow-filled mountain path, her knife at a child’s throat. Archie Chung at the helm of the South Pacific Belle, foremast snapped like a toothpick, barreling toward a coral reef. Spindly Lydia Freeman, skin the color of dark ale, feeding tea made of birch bark to an Irish murderess. Zeke Roxxmott teetering at three hundred feet on the five-inch ledge of his penthouse, bent on a flawless destruction.

Adventurers, inextricably linked by a bloodline… and an Indian’s coin.

Where history and imagination meet!

John Mugglebee’s Neespaugot is based on the real-life exploits of his own ancestors. A sweeping historical saga of his Native American, African American, Scots-Irish, Chinese, Russian Jewish family, it spans three centuries with adventures that keep you turning page after page. You’ll fall in love with these characters, who stay with you long after you’ve put the book down.

John Mugglebee is a racial and ethnic jigsaw puzzle. His heritage, in chronological order, includes Native American, African American, Scots-Irish, Chinese and Russian Jew. John has said there were two major factors that shaped him as a person and a writer. One was “Being colored but not knowing which color.”

The other was upheaval. Born in Massachusetts, at age eleven he was uprooted to Southern California in the midst of the ’60s race riots. Growing up, John was told family stories that had been passed down for generations. Neespaugot is loosely based on those stories.

He currently lives in the South of France, where he heads a language laboratory for French Civil Aviation. John graduated from Dartmouth and earned a master’s in creative writing from Colorado State University. His previous novel, Renaissance in Provence, was published in 2004.

My thoughts:
I thought this was a very interesting book. It was a little different at first but the more I read it the more I enjoyed it. How each of the situations are all linked by the legend of the coin was kind of thought provoking. Then when you realize that these are all based on true events makes you really stop and think. I liked the details that the author included and that the stories spanned more than one generation. For me the Native American aspect is what drew me to the book. If you want a story about historical legends then this is the book for you.

Food conversations in France are as prevalent as weather comments in the United Kingdom. So, leave it to a couple of French friends to tease me over “a lack of gastronomy” in my historical novel Neespaugot. “Pourquoi? Don’t you appreciate fine cuisine?”

It was an interesting question. As a fiction writer, where did I stand on food scenes of any kind, gourmet or ham and potatoes? In general, eating can be an effective means of forwarding the action but, like sex, probably should be dosed with moderation lest it become cloying to the reader. Then, there’s the obvious point that what a character eats should fit his background every bit as much as his clothing and speech. The protagonists of Neespaugot, who are just trying to survive, eat for sustenance, not pleasure, hence the lack of fine cuisine.

Which leads to a cultural question: In Neespaugot, are the food scenes saying something about the history of American eating habits? I’d say yes. Starting from our first Thanksgiving, the act of partaking has always been central to American celebrations, with food as an ancillary pleasure. It is not what one eats but rather where and with whom one eats it.

I enjoy as much as the next person a good pot-au-feu, a goose cassoulet, a leg of lamb, a slice of foie gras or a bouillabaisse, washed down with a glass of red Châteauneuf-du-Pape, white Burgundy or chilled rosé from Provence. But the fact remains that my most memorable eating experiences have been as much about the unique venues and the good company as the fine food.

I hadn’t been in France long when Jean, the manager of the semi-professional rugby club I played for, invited me to visit his ancestral village 200 miles away, a tiny hamlet snuggled away in the rolling foothills of the Pyrenees Mountains, where Jean’s 75-year-old mother lived. Mimi tended a tidy garden of plum, apple and fig trees, melon, squash and lettuce patches and neat rows of tomato plants, and the air was perfumed with the scent of fennel. Mimi also had hutches, and as she showed me her rabbits, she asked me which one I liked. A city boy, I thought she meant which one was the cutest. Not wishing to disappoint, I singled out a rabbit at random. Mimi pulled out the animal and deftly dispatched it with a forceful karate chop to the back of the neck. Then, she repeated the act with another unfortunate creature, before skinning both and hanging them up to dry. Two days later, half the hamlet turned up bearing melons, charcuterie, tossed salads, tomato and onion dishes, cassoulets, cheeses, fresh strawberries, sweets and, of course, wines of all color and taste. The day was warm and bright and we gathered in the garden, around a banquet-sized table offering an unobstructed view of the high Pyrenees. Mimi brought out her rabbit-in-red-wine dish (civet) to a round of applause -- I paid secret penance to the sacrificial critters. Then, we dug in. The meal was delicious, but my strongest images are of spending a wonderful afternoon with some really good people. It was my first four-hour sit-down lunch.

A particular dinner in Tunisia evokes similar memories. We were packed into Ali’s pick-up truck, bouncing through the fertile valley of Dougga, passing donkeys and farmers wearing gelabas, destination El Krib, 100 miles southwest of Tunis. There were four of us making the trip: Ali, who worked construction half the year in France and half in Tunisia; Gwen, his English girlfriend; Raewyn, Gwen’s New Zealand friend; and me. We climbed through dusty barren hills, arriving at an isolated clearing just as the sun dipped behind the Atlas Mountains. Ali’s family home was in the middle of nowhere, a clay hovel attached to a series of rickety stables and mangers for sheep, cows, donkeys, goats and chickens, all guarded by several enormous dogs which we weren’t allowed to approach because they were more dangerous than the wolves they chased away each night. Ali’s family, some fifteen of them, greeted us as if we were the Heads of State. The women were dressed in colorful costumes, without veils or shawls. We washed our hands in a well bucket and sat on a dirt floor around an iron tub of couscous with vegetables and the lamb that had been slaughtered for the occasion. Later, stuffed to the gills, we stepped outside where the night air was cool, the star-lit heavens brighter than the dark silhouette of rolling hills. The howl of wolves had the dogs snarling, the sheep braying, the donkeys honking. It was like a scene out of the Bible, beautiful, mystical. The entire evening was a feast for the five senses.

These and similar experiences have taught me that, under certain circumstances, a meal can be a canvas allowing several emotions to play out. In Neespaugot, a fireside meal à deux in the forest leads a former prostitute into making actual love for the first time in her life; a picnic at the beach results in a couple of middle-aged virgins declaring a long-buried mutual love; and a wedding reception with former slaves becomes a celebration of freedom. When we partake of a meal, we share more than food. Together we become actors in a moment in time that can become life-defining and unforgettable. 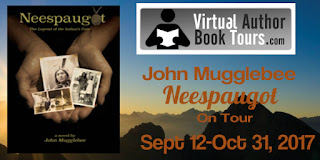