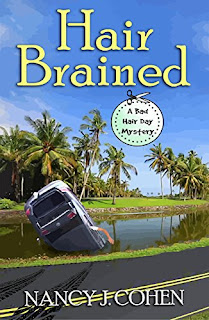 About this book:
Was the car crash an accident or a deliberate attempt to run Marla’s friends off the road?

When hairstylist Marla Vail’s best friend is hurt in a suspicious car accident, Marla assumes guardianship of her infant son. No sooner does Marla say, “Baby want a bottle?” than she’s embroiled in another murder investigation. Her husband, Detective Dalton Vail, determines the crash may not have been an accident after all. But then, who would want Tally–or Ken in the car with her–out of the way? As Marla digs deeper into her friends’ lives, she realizes she didn’t know them as well as she’d thought. Nonetheless, it’s her duty as their son’s guardian to ensure his safety, even if it means putting her own life at risk. Can she protect the baby and find the culprit before someone else ends up as roadkill?

featuring South Florida hairstylist Marla Vail. Titles in this series have made the IMBA bestseller list and been selected by Suspense Magazineas best cozy mystery. Nancy has also written the instructional guide, Writing the Cozy Mystery. Her imaginative romances, including the Drift Lords series, have proven popular with fans as well. A featured speaker at libraries, conferences, and community events, Nancy is listed in Contemporary Authors, Poets & Writers, and Who’s Who in U.S. Writers, Editors, & Poets. When not busy writing, she enjoys fine dining, cruising, visiting Disney World, and shopping.

It’s important for fiction writers to choose character names that don’t sound alike. This is one of the hardest things for me to do. Some writers keep spreadsheets of the main characters and the secondary cast that shows up in different series volumes. I’ve tried this technique but it gets too complicated for me. So I keep my own Continuing Cast for the recurrent characters, and my list of suspects for each individual novel.

No matter how hard I try, I still end up with names like these in Hair Brained, #14 in the Bad Hair Day Mysteries:

Is it worth the effort to change a name when you notice this indiscretion down the line? Sometimes it isn’t possible because you’ve introduced a person in a previous book. You can’t do anything about that one. You can only alter the names assigned to a newer story.

For example, in Trimmed to Death, my current work-in-progress, I started out with a food critic named Alton Paige. Then I noticed characters named Alyce and Arnie in the story. Whoops. I changed the food critic’s first name to Carlton. These slip-ups happen to me all the time as witnessed in Hair Brained. Here’s an interchange between Darryl and Dalton. Since these two people aren’t together too often in the story, I decided to leave it as is. Hopefully the suspense will keep readers turning pages rather than noticing the name similarities. Darryl is a suspect, while Dalton is a homicide detective. He’s also the husband of hairstylist and sleuth Marla Vail.

“Hey, guys, what are you doing here?” Darryl gazed at them in surprise. He’d forsworn his business attire for a sport shirt and shorts with boating shoes. He wore a baseball cap on his gray hair.

Dalton regarded the blonde in a bikini on the account executive’s arm. “We were hoping to speak to you in private.”

“Is that so? I’ll do the paperwork for my rental, and then you can have a few. Babe, why don’t you wait on that bench over there? I won’t be long.”

“We were wondering what you can tell us about Ryan,” Dalton began, when the three of them stood under the shade of a coconut palm on a grassy swale.

Not far away stood the familiar Bahia Mar resort, its white structure an icon in the area and the mecca for the Fort Lauderdale Boat Show. Valet parking at that stellar event cost sixty dollars per day. Was this the crowd Darryl emulated to join?

Darryl kicked at a pebble on the ground. “Ryan is a good kid. He’s personable with our clients, returns phone calls promptly, and gets the job done. I don’t see him staying in that position for any length of time.”

“He’ll jump ship as soon as a better offer comes along.”

“You don’t think he covets your role or Shawna’s?”

“We’re not going anywhere, so he’d have to seek a promotion at another place. His position is better suited to someone like Jeri, who’s content to get a salary with benefits and do the job. Ryan is on a career track. He makes no secret about it.”

“I understand his mother has Alzheimer’s disease. How can he afford to take care of her and own an expensive car?” Marla inquired. “I notice he has the latest tech gadgets, too.”

“Maybe his old lady has savings? I’ve never asked. As for the car, how do you know he owns it? He could have a lease.”

“That’s true.” She gave Dalton a thoughtful glance. “We were wondering if Ken found any irregularities among those two. You know, Jeri has an ill daughter. They both have the duty of caring for a loved one.”

Darryl glowered at her. “Ken wouldn’t tolerate any discrepancies in the books, if that’s what you mean.”

I find it infinitely more confusing when a writer gives a character an opposite gender name like Sam for a woman. Then I am constantly pondering the sex of this person until I get to know them better. A unisex name can be just as confusing. Is Chris a man or a woman? How about Alex? It helps to have some other way to identify this person.

Does it bother you when too many character names sound alike or don’t you notice? 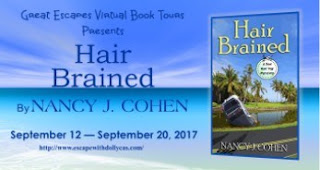