A Gilded Grave by Shelley Freydont - Review and Guest Post 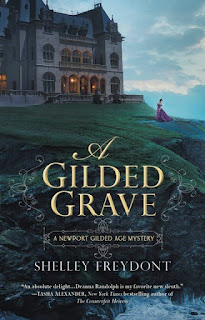 Synopsis:
In 1895, the height of the Gilded Age, the social elite spend their summers in Newport, Rhode Island. Within the walls of their fabulous “cottages,” competition for superiority is ruthless … and so are the players.

During her first Newport season, Deanna Randolph attends a ball given in honor of Lord David Manchester, a Barbadian sugar magnate, and his sister, Madeline. The Manchesters are an immediate success—along with their exotic manservant and his fortune-telling talents.

But on the nearby cliffs, a young maid lies dead—and suspicion falls on Joseph Ballard, a member of one of the town’s most prestigious families.

Joe humiliated Deanna when he rebuffed an engagement to her, but while he may be a cad, she knows he isn’t a killer. Now the reluctant allies must navigate a world of parties, tennis matches, and séances to find the real murderer. But a misstep among the glittering upper classes could leave them exposed to something far more dangerous than malicious gossip…

What I thought about the book:
This was a good start to a new series that I know I will enjoy with each new book that this author writes. Of course I love history and mystery and you will even find a little romance in here so this book hooked me from the start. I liked how you can tell the author did her research in writing this book. The historical details show through. She also did a good job of keeping you guessing who killed the maid. There are plenty of twist and turns to keep you interested and wanting to read more. I thought the characters were very interesting and some of them you would not mind getting to know more about. I am looking forward to seeing what Deanna gets herself mixed up in the next installment to this series.

What did I think of the cover:
I thought the cover looked a little dark but after reading the story it is well fitting. Of course you can tell this scene was supposed to be at night so that is why it is a little darker. I love the mansion on the front.

About the author:
Shelley Freydont is the author of the Liv Montgomery Celebration Bay Mysteries, Foul Play at the Fair

as well as the Kate MacDonald Sudoku Mysteries and the Lindy Haggerty dance company mysteries, and the upcoming Newport Gilded Age Mysteries, beginning with A Gilded Grave

As Shelley Noble, she is the NYTimes Best selling author of women’s fiction (Beach Colors

as well as several novellas. A former professional dancer and choreographer, Shelley lives at the Jersey shore and loves puzzles, light houses and antique carousels. She also loves to hear from readers.


Guest Post:
The Making of a Gilded Age Debutant Sleuth

Just about everyone knows Lady Grantham of Downton Abbey. She was Cora Levinson, an American heiress, before marrying into British royalty. It was “the thing” to marry off your daughters to European aristocrats, especially if your family was not one of Mrs. Astor’s four hundred. (The number of guests who were said to fit in her ballroom.) The Europeans had the titles, the Americans had the fortunes to support their lifestyle.

In A GILDED GRAVE my sleuth Deanna Randolph is a young heiress, whose ambitious mother is constantly on the look out for a husband that will insure her success in society and it doesn’t matter if he is a British Duke or an American railroad baron. Deanna has different ideas. The most scandalous being, she doesn’t want to get married at all. At least not yet. Not until she finds someone she loves, who will not boss her around and tell her what she can do and not do. And most importantly someone who loves her back.

Deanna is determined to become a “Modern woman” or at least she will be just as soon as she gets enough freedom to find out what a modern woman does exactly. She does know that they join cycling clubs, wear the new lighter swimming costumes, don’t wear their corsets while playing tennis, believe in women’s rights and aren’t afraid to stand up to injustice.

She doubts if even a modern women goes about solving murders, but it’s just what Deanna and her maid Elspeth do. They’ve undoubtedly been inspired by the cheap Dime novels they read each night before bed. With titles like Lady Kate, The Dashing Lady Detective, Madge the Society Detective, or Elspeth’s favorite, Cad Metti, The Female Detective Strategist—if by strategy you mean disguising herself and engaging in fisticuffs with the villain—how could they not investigate.

They soon learn that searching for a murderer is considerably more difficult in real life than it is on the pages of a Dime Novel—and more dangerous.

You can read more about Deanna and Elspeth’s experiments in crime solving in A GILDED GRAVE, the first in the Newport Gilded Age mysteries.