The Wednesday Letters by Jason Wright 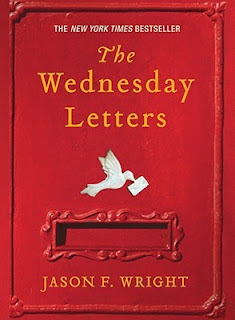 Synopsis:
The surprise New York Times bestseller, from an author who delivers “American storytelling at its best.”

The story of marriage, family, and forgiveness that has become not just a bestseller but an instant classic.

Their story begins with one letter on their wedding night, a letter from the groom, promising to write his bride every week—for as long they both shall live.

Thirty-nine years later, Jack and Laurel Cooper die in each other’s arms. And when their grown children return to the family B&B to arrange the funeral, they discover thousands of letters.

The letters they read tell of surprising joys and sorrows. They also hint at a shocking family secret—and ultimately force the children to confront a life-changing moment of truth…

What did I think of the book:
I loved this book so much that I read the whole thing in one day. My favorite part of the book was the letters. I found myself wanting to rush through the parts that were not letters just so I could to the next letter. Once I got even closer to the mystery the family had hidden the faster I read. I was shocked when I found out what happened and even more shocked to find out all the truth. Jack and Laurel had such a love that most people dream of. I love the idea of Jack writing a letter every Wednesday starting with the day they were married right up until the day they died. Not many books lead me to tears but this was one that did. It has also inspired me to write letters like Jack's. I highly recommend this book.

What I thought of the cover:
The cover is a simple it fits with the story. As you read the book towards the end you will find the real meaning behind the cover and see that the cover fits the book perfectly.

Articles by Jason have appeared in over 50 newspapers and magazines across the United States including The Washington Times, The Chicago Tribune, and Forbes. He has been seen on FoxNews, CNN, CSPAN and on many local and national radio shows.

Jason is also a popular speaker who speaks to over 100,000 annually on topics ranging from the value of service, the joy of failure, the lost art of letter writing and many other topics.

He lives with his wife, Kodi, and their four children in the Shenandoah Valley of Virginia.
Posted by Angela - Bookaunt at Monday, August 03, 2015