Matters of the Heart by Danielle Steel 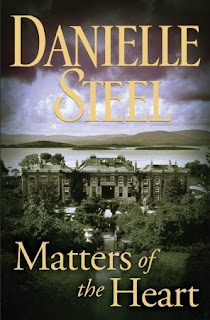 Synopsis:
Top photographer Hope Dunne has known joy and heartbreak, and finds serenity through the lens of her camera. Content in her Soho loft, she isn’t looking for a man or excitement. But these things find her when she flies to London to photograph one of the world’s most celebrated writers.

Finn O’Neill exudes warmth and a boyish charm. Enormously successful, he is a perfect counterpoint to Hope’s quiet, steady grace--and he’s taken instantly by her. He courts her as no one ever has before, whisking her away to his palatial, isolated Irish estate.

Hope finds it all, and him, irresistible. But soon cracks begin to appear in his stories: gaps in his history, a few innocent lies, and bouts of jealousy unnerve her. Suddenly Hope is both in love and deeply in doubt, and ultimately frightened of the man she loves. Is it possible that this adoring man is hiding something even worse? The spell cast by a brilliant sociopath has her trapped in his web, too confused and dazzled to escape, as he continues to tighten his grip on her.

Danielle Steel delivers an unforgettable tale of danger and obsessive love as she explores the dark secrets that sometimes lurk just below the surface of ordinary lives, writing about men and women and their courage to prevail even in the face of evil.

What did I think of this book:
I believe this is the first book I have read by Danielle Steel as I do not remember reading any of her other books and I have to say I was disappointed in this book. I felt in the beginning that the characters and the author repeated themselves so much that I was reading the same thing over and over. For me the book just seemed to read a little slow - I knew something bad was going to happen and I kept waiting for it. Then in the last 100 pages the book was good and had me reading faster so I could find out what happened next. I really wish the rest of the book was this was for me. Then I wanted just a little more at the end to know what happened next to Hope. I do not like writing bad reviews but I feel this was just not the book for me. This will not stop me from trying another book by this author though.

Twenty-one of Ms. Steel's novels have been adapted for television, each earning high ratings and critical acclaim, including two Golden Globe nominations for JEWELS, a four-hour mini-series that starred Anthony Andrews.

In addition, Ms. Steel is the author of the "Max and Martha" series of books for young readers. They are ten illustrated storybooks written to comfort the young as they face problems, such as a new stepfather, new baby, new school, loss of a grandparent, and other crucial dilemmas in a child's life. She has also written the "Freddie" books, four of them, about real-life situations in children's lives, like a visit to the doctor and the first night away from home. Ms. Steel has also written nonfiction, HIS BRIGHT LIGHT, about the life and death of her son Nicholas Traina, released by Delacorte Press in September 1998 and immediately jumped to the New York Times Non-Fiction bestseller list and "Having a Baby." She has also written a book of poetry entitled LOVE: POEMS BY DANIELLE STEEL.

In 2002, Ms. Steel was decorated by the French government as an "Officier" of the distinguished Order of Arts and Letters, for her lifetime contribution to world culture. She was awarded the second highest rank of the Order.