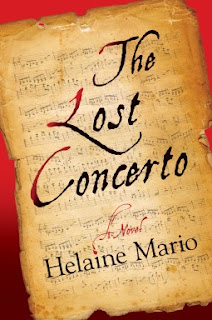 Synopsis:
A woman and her young son flee to a convent on a remote island off the Breton coast of France. Generations of seafarers have named the place Ile de la Brume, or Fog Island. In a chapel high on a cliff, a tragic death occurs and a terrified child vanishes into the mist.

The child’s godmother, Maggie O’Shea, haunted by the violent deaths of her husband and best friend, has withdrawn from her life as a classical pianist. But then a recording of unforgettable music and a grainy photograph surface, connecting her missing godson to a long-lost first love.

The photograph will draw Maggie inexorably into a collision course with criminal forces, decades-long secrets, stolen art and musical artifacts, and deadly terrorists. Her search will take her to the Festival de Musique, Aix-en-Provence, France, where she discovers answers to the mystery surrounding her husband’s death, an unexpected love—and a musical masterpiece lost for centuries.

What I thought about this book
I thought this book was full of suspense and mystery. It is a book that will keep you turning the pages to find out what is going to happen next. I like the mix of romance, mystery and the musical aspect of this book. I do not know much about classical music and this gave me just a glimpse. The author did a good job with the characters in this book. Her writing style was very good and made the story flow for me. Then just when you think you have everything figured out the author throws in a twist for you to second guess what is going on. I am looking forward to reading more books by this author.

What did I think of the cover:
I thought this cover was very fitting for the story since the main character was a classic pianist. I love the way the music looks old.

About the author:
Helaine Mario grew up in the New York City area and is a graduate of Boston University. She has served on many nonprofit boards both while residing in the DC area. A passionate advocate for women’s and children’s issues, she is the founder and president of The SunDial Foundation, which contributes to over 30 DC area nonprofits. Helaine and her husband Ron now live in Arlington, Virginia, and Sarasota, Florida. The Lost Concerto, her second novel, was inspired by her son Sean, a classical pianist.

RESEARCH AS INSPIRATION:  MUSIC & ART IN ‘THE LOST CONCERTO’
by HELAINE MARIO
Maggie O'Shea is grieving the loss of her husband, who has drowned in a tragic accident far from home. Her grief has crushed her passion for music, and for Maggie, a classical concert pianist, the loss of her music is unbearable.  Moving on is unthinkable, until a grainy photograph draws her into a perilous search across France for her missing godson and a long-lost love.  The Lost Concerto tells Maggie's story, a story of love, loss, vengeance and courage, a story of mystery and intrigue and danger.  Ultimately, it is the story of a woman who must fight to move on and find what has been lost within herself.  InThe Lost Concerto, it is music that tells Maggie's story.

Every writer’s story is very different and personal.  For me, growing up in Queens, NY, I loved to read but never imagined I would write a book.  My passion for writing actually found me later in life, when a story began to take shape in my mind.  Just the briefest images at first - a woman’s hands on piano keys;  a bearded man sitting at an outdoor café table.  But I had no idea how to write a novel.  We’ve all heard that Writing Rule #1 is to ‘write about what we know.’  But I knew that I wanted to write the kind of book that I wanted to read.  And that meant writing about what I LOVE.  Family, art and music.

So the first decisions for my novel were easy.  My main female character would be a classical concert pianist, inspired by my pianist son.  One of my male characters would be a collector of great artworks.  There was just one small problem…  My knowledge of art was limited to my favorite artists - the Impressionists and Post-Impressionists - and I still cannot find middle C on a piano.  So that meant RESEARCH.  Hours and hours and hours of research.

Current events and history, books and movies can be huge sources of research – and inspiration - for the writer. The good news is that research can surprise you, and take your story in a totally different and unexpected direction.  This happened to me.

As I tried to expand my knowledge of art, I kept coming across articles on missing art – especially art that was lost, stolen or destroyed during World War II.  One article told the story of over 1200 paintings looted during the war, worth more than one billion dollars, that were recovered in the Munich apartment of a German recluse known as ‘the ghost.’  ‘The ghost’ struck a chord in me, and I began to think more about my character, ‘the collector.’  What if his art collection was stolen?  Back to my research.

Researching ‘Stolen Art,’ I discovered the book The Monuments Men, (now a movie) by historian Robert Edsel.  The Monuments Men were 345 museum directors, art scholars, curators, educators and artists who risked their lives during World War II to search for and protect the greatest cultural treasures of Europe that were being lost, seized or destroyed by the Nazis.  Priceless art treasures were hidden in basements, train cars, oil barrels, salt mines, tunnels and holes in the ground.  These brave men and women were able to locate and return more than five million looted cultural items, including Kilmt’s Mada Primavesi and Monet’s The Parc Monceau, two of eleven restituted pieces on exhibit at the Metropolitan Museum of Art in NYC.  When I stood before The Parc Monceau at the Met, discovered hidden in a Paris bank vault, I was overcome by the beauty of Monet’s work, the sunlight and shadows, the way it made me feel.  What would we have lost if this painting had never been found?  Or worse, destroyed?  And I asked myself:  What if my character’s art collection was looted and hidden by the Nazis during the war?

But art, sculpture, jewels and gold were not the only treasures looted during World War II.  You may be surprised to learn that, in an attempt to wipe out whole cultures, millions of books, thousands of rare instruments, and countless original musical scores by the great composers, disappeared during the war as well.

Then I read a shocking report published by the UK’s Daily Mail.  It revealed that “Adolf Hitler kept a vast record collection of ‘forbidden’ music by Jewish (and Russian) composers.”  The family of a World War II Russian officer finally disclosed that music banned under the Third Reich – including works by Mendelssohn, Offenbach, Rachmaninov and Tchaikovsky – were discovered in 1945 hidden in Hitler’s bunker, with scratch marks indicating that these 78 rpm recordings, publically labeled ‘sub-human music,’ had been played repeatedly.  Can you imagine never hearing Tchaikovsky, never taking your grandchildren to Swan Lake or the Nutcracker, because his glorious music was lost forever?

And there it was.  This was the new direction that would bring my story to life.  Stolen and missing art was an excellent premise for a plot, but I needed – Iwanted - something more.  Something to connect this story to my main character, the classical pianist Maggie O’Shea.  Lost or stolen music was the answer.

Back to the research.  A Vivaldi concerto, lost for three hundred years, was found in a dusty archive in Scotland. Priceless autographed music manuscripts and letters by Heifetz, Casals and Strauss were stolen from Israel’s national library.  During World War II, an entire generation of musicians, composers and virtuosos vanished.  Hundreds of rare Stradivarii violins, violas and cellos disappeared from orchestras and musicians all over Europe.  Handwritten musical scores by Mozart, Beethoven and Bach were confiscated from countless museums, houses of worship, monasteries, cultural sites and private homes and collections.  Long hidden musical scores and sheet music were discovered in a salt mine near Thuringia, Germany, after the war.

Now, I finally had the heart of my story - music.  And I had my title as well:  The Lost Concerto.  It is music that sets this story apart, music that tells Maggie’s story.

Giveaway:
This giveaway is open to the US only. It is for one hardback copy of The Lost Concerto by Helaine Mario. It is mandatory that you leave a comment and this will be verified. This is a rafflecopter giveaway and the will be drawn randomly. The winner then will be emailed and have 24 hours to respond or a new winner will be chosen. Thank you and good luck.

Be sure to stop by Partners in Crime to see all the stops on the tour
Posted by Angela - Bookaunt at Tuesday, August 11, 2015