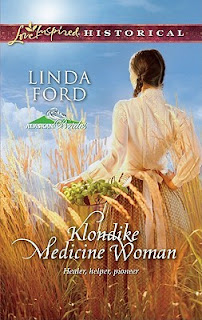 Synopsis:
Dr. Jacob Calloway was the answer to her prayers—whether he liked it or not. Teena Crow is desperate to learn his scientific healing methods to help her people. But Jacob is too suspicious of Teena's native remedies to allow her near Treasure Creek's clinic. So she decides to earn his respect—and teach the good doctor to see beyond surface differences to their common goal.

But it's not just Teena's medicines that render Jacob uncomfortable. Her warm gaze and determination dare him to open his heart. But can their fledgling love weather a town's disapproval, or the secrets they both hide?

What did I think of this book:
This was a good book. I like the fact that it took place in the Klondike during the Alaskan Gold Rush and that it included Native Americans. There were a couple of parts that could have moved a little faster for me but I think the reason it didn't move faster is because of the character Jacob. Jacob was very stubborn and would not let go of his hatred for Native Americans. I really liked Teena the best, she was so strong. She had to endure the way the white men talked to her and treated her and she really wanted to learn white man's medicine. I also loved the Tucker sisters they were quite the characters.