Room for Improvement by Stacey Ballis 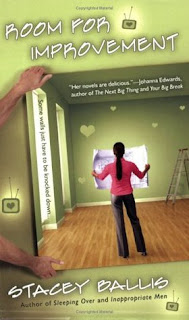 Synopsis:
Stacey Ballis tackles home improvement and reality TV—and reminds us that sometimes life and love are better left unscripted…What do you get when you give two hopeful singles fashion consultants and interior designers, allow them four days to perk up each other’s homes and get a total style overhaul, then let their single friends celebrate the results at a fabulous party? You get Swap/Meet, the newest reality show on the network block, where major changes are either embraced or embarrassing—and Lily Allen’s dream job turned nightmare.

At first, Lily was thrilled to appear on Swap/Meet. What better way for a Chicago interior designer to promote her business and enjoy some pseudo-celebrity? She just didn’t think she’d be doing take after take with the ditzy host, dodging sabotage attempts, and getting caught in the middle of the fashion czars’ lovers’ spat. Plus, the cute, curmudgeonly carpenter on her team knows just how to push her buttons. Episode by episode, through do-it-yourself disasters and matchmaking miracles, Lily discovers that a little bit of controlled chaos is the spice of life—and love…

What I thought of this book:
I really liked this book. It has one of my favorite things a house/room remodel show and a fashion makeover. Let's talk about the characters: Lily - I really liked her and felt bad for her for not being able to find a "boyfriend", Naomi and Hillary - they were great friends to Lily and helped her to see what she was doing wrong. I liked that the three of these ladies had been friends since they were little. Curt - I thought he was a good work friend for Lily and I liked how they played off each other. Jake and Gary - I did not like as they were trying to much to be players. Ashleigh - I also did not like her as she just was not nice. The two fashion designers Bryan and Jou were good guys just going through a touch time in their relationship. Another thing I liked was how at the beginning of some of the chapters we got a synopsis of that week's episode of the tv show. This book really read quickly and smoothly for me. It was the first book I have read by this author and I am looking forward to reading more of her books.

What did I think of the cover:
I thought the cover was very fitting for this book. You see a room designer looking over her plans in a blank slate of a room. I also like the cover choices.

About the author:
Stacey Ballis is the author of several novels, incuding Inappropriate Men, Sleeping Over, Room for Improvement, The Spinster Sisters, Good Enough to Eat, Off the Menu and Out to Lunch, and the upcoming Recipe for Disaster currently available for pre-order, being released March 3, 2013. Her first cookbook, Big Delicious Life is out now in a digital edition, and she is at work co-authoring a new cookbook called Cooking for You: Wellness in the Kitchen with Dr. Francis Ardito, which will be released in 2015. She is also a contributing author to the anthologies Girls Who Like Boys Who Like Boys, and Everything I Needed to Know About Being a Girl I Learned From Judy Blume, and Living Jewishly. She is currently at work on a new work of full-length fiction called for Berkeley/Penguin, which will be out in 2016.
Posted by Angela - Bookaunt at Sunday, August 09, 2015

Email ThisBlogThis!Share to TwitterShare to FacebookShare to Pinterest
Labels: chick-lit