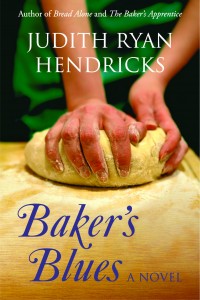 Synopsis:
In Wyn Morrison’s world a 5 A.M. phone call is rarely good news. It usually means equipment trouble at her bakery or a first shift employee calling in sick—something annoying but mundane, fixable. But the news she receives on a warm July morning is anything but mundane. Or fixable.

Mac, her ex-husband, is dead.

He’s not just in a different house with another woman, but actually, physically gone. Ineligible for widowhood, Wyn is nonetheless shaken to her core as she discovers that the fact of divorce offers no immunity from grief.

As Mac's executor, Wyn is now faced with not only sorting his possessions and selling the house, but also with helping his daughter Skye deal with financial and legal aspects of the estate--a task made more difficult by Skye’s grief, anger and resentment.

Ironically, just when Wyn needs support most, everyone she’s closest to is otherwise occupied. Her mother and stepfather have moved to Northern California, her best friend CM has finally married the love of her life and is commuting to New York, and her protégé Tyler is busy managing the bakery and dealing with her first serious love affair. They’re all sympathetic, but bewildered by her spiral into sadness. After all, it’s been three years since the divorce.

On her own, she stumbles at first. For the last several years Wyn has been more businesswoman than baker, leaving the actual bread making to others. Now, as she takes up her place in the bread rotation once more, she will sift through her memories, coming to terms with Mac and his demons, with Skye’s anger, and with Alex, who was once more than a friend. Soon she will re-learn the lessons that she first discovered at the Queen Street Bakery in Seattle…that bread is a process--slow, arduous, messy, mysterious--and best consumed with the eyes closed and the heart open.

What did I think of this book:

This is the first book that I have read by this author and after reading this I have now purchased the first two books and will be reading them as well. Although I would suggest reading them in order. I can't not imagine what all Wyn was going through finding out that not only was her ex-husband dead but she was the executor of his will. I think she was a strong person to deal with all she had going on especially since the people she needed to lean on were all too busy to help out. I like how she uses baking bread to get through her tough times. This story is a heartfelt story that leaves you wanting more. I really enjoyed getting to know the characters and am looking forward to learning Wyn's past by going back and reading the first two books.

What I thought about the cover:

I liked this cover and how it related to the story. It is always fun to watch someone making homemade bread.

About the author:
Armed with a degree in journalism and a short attention span, Judith Ryan Hendricks worked as a journalist, copywriter, computer instructor, travel agent, waitress and baker before turning to fiction writing. Her first novel, Bread Alone, was a national bestseller and a BookSense 76 pick. It was followed by Isabel's Daughter, set in Santa Fe, and The Baker's Apprentice. The Laws of Harmony was published in February, 2009 and was nominated for The Santa Fe Reporter's "Best of Santa Fe." Baker's Blues, part three of the bakery trilogy, will be available in August 2015. Hendricks' fiction has been translated into 12 languages and distributed in 16 countries. She lives in New Mexico with husband Geoff and dog Blue. Author's website: http://judihendricks.com

Giveaway:
This giveaway is open to the US and Canada. It is for one copy of Baker's Blues. It is mandatory that you leave a comment and this will be verified. This is a rafflecopter giveaway and the winner will be randomly chosen. The winner will then be emailed and have 24 hours to respond or a new winner will be chosen.