Cold Revenge by Jo A. Hiestand - Spotlight and Giveaway 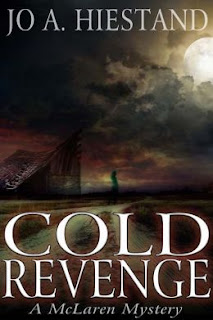 Synopsis:
One year ago, Marta Hughes won a purse-choking sum of money at a local casino. She never returned home. Her body was discovered in a ditch twelve miles from her home; her car was back in her driveway. Linnet Isherwood cannot let her friend's unsolved murder rest. She convinces ex-cop Michael McLaren to return to the work he loves. He sifts through a confusing web of lies, misconceptions and veiled motives. Are anonymous late-night phone calls, a vanished hitchhiker, and a stalker wielding empty beer bottles somehow related to the case? Or maybe the woman he broke off with is seeking revenge.

About the author:
A true Anglophile, Jo Hiestand wanted to capture the traditional flavor of a detective crime novel and the intimate atmosphere of a British cozy. The result is the McLaren Case mystery series featuring ex-police detective Michael McLaren who now investigates cold cases on his own. Jo has combined her love of writing, board games and music by co-inventing P.I.R.A.T.E.S., the mystery-solving game that uses maps, graphics, song lyrics, and other clues to lead the players to the lost treasure. In 2001 she graduated from Webster University with a BA degree in English and departmental honors. Peter Lovesey, author of the Sergeant Cribb and Peter Diamond series, praises Jo’s writing: “Immaculate research, attention to detail and an elegant style are the hallmarks of Jo Hiestand’s writing. (Horns of a Dilemma is) an atmospheric novel.” Jo founded the Greater St. Louis Chapter of Sisters in Crime, serving as its first president. She is also a member of Mystery Writers of America.
http://www.johiestand.com/​ https://www.facebook.com/pages/Jo-Hiestand-Mystery-Author/203133803128

a Rafflecopter giveaway
Posted by Angela - Bookaunt at Tuesday, August 04, 2015