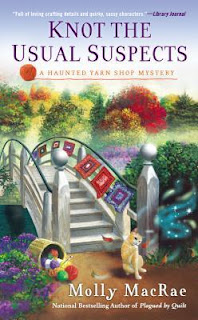 I received this book in exchange for a fair and honest review:

Synopsis:
In the latest from the bestselling author of Plagued by Quilt, Kath Rutledge yarn bombs Blue Plum, Tennessee—and gets tangled up in the mystery of a bumped-off bagpiper.

It’s time for Handmade Blue Plum, an annual arts and crafts fair, and Kath and her knitting group TGIF (Thank Goodness It’s Fiber) plan to kick off the festivities with a yarn bombing. But they’re not the only ones needling Blue Plum. Bagpiper and former resident Hugh McPhee had just returned after a long absence, yet his reception is anything but cozy. The morning after his arrival, he’s found dead in full piper’s regalia.

Although shaken, Kath and her knitting group go forward with their yarn installation—only to hit a deadly snag. Now, with the help of Geneva, the ghost who haunts her shop, Kath and TGIF need to unravel the mystery before someone else gets kilt!

What did I think of this book:
I am a fan of cozy mysteries and if they include a haunted aspect to the book that makes them that much more enjoyable for me. This book was a quick read and I was able to read it in two days. I enjoy getting the chance to visit all of my friends in the TGIF group. It would be such fun to attend the craft show. I like when the mystery keeps me guessing until the last of the book and this did just that. It seems that Kath always gets knotted up in some sort of adventure trying to figure things out before the police do. If you enjoy knitting, mystery, and ghosts then this is the book for you. I suggest you start with book one so that you don't miss out on any of the adventures that Kath and her group have gone through. I look forward to the next book in this series.

About the author:
Molly MacRae writes the award-winning Haunted Yarn Shop Mysteries published by Penguin Random House. The books star Kath Rutledge, a textile preservation specialist, who inherits her grandmother's yarn and fabric shop in Blue Plum, Tennessee, and ends up with a depressed ghost on her hands. Think of it as the series that puts the woo-woo in the wool.

Molly spent twenty years in the foothills of the Blue Ridge Mountains in northeast Tennessee, where she managed the Book Place, an independent bookstore; may it rest in peace. Before the lure of books hooked her, she was the curator of the history museum in Jonesborough, Tennessee's oldest town. Her short stories have appeared in Alfred Hitchcock's Mystery Magazine for more than twenty years, and she won the Sherwood Anderson Award for Short Fiction. Molly lives with her family in Champaign, Illinois, where she connects children with books at the public library.