Into the Wild by Jon Krakauer 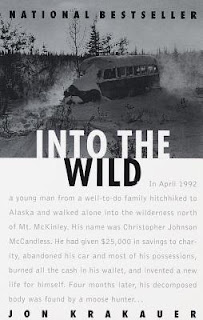 Synopsis:
In April 1992 a young man from a well-to-do family hitchhiked to Alaska and walked alone into the wilderness north of Mt. McKinley. His name was Christopher Johnson McCandless. He had given $25,000 in savings to charity, abandoned his car and most of his possessions, burned all the cash in his wallet, and invented a new life for himself. Four months later, his decomposed body was found by a party of moose hunters. How McCandless came to die is the unforgettable story of Into the Wild.

Immediately after graduating from college in 1991, McCandless had roamed through the West and Southwest on a vision quest like those made by his heroes Jack London and John Muir. In the Mojave Desert he abandoned his car, stripped it of its license plates, and burned all of his cash. He would give himself a new name, Alexander Supertramp, and , unencumbered by money and belongings, he would be free to wallow in the raw, unfiltered experiences that nature presented. Craving a blank spot on the map, McCandless simply threw the maps away. Leaving behind his desperate parents and sister, he vanished into the wild.

What I thought about this book:
I really wanted to like this book more than I did. It was an interesting story about how one man went to Alaska and never came back. The parts of the book that talked about Christopher and his journey were good to read. With that being said the parts of the book that talked about other people who have perished on their journeys and some of the "technical" things were boring to me. There is a lot of reading packed into this little book. I am glad that I read the book but at the same time I felt as if I struggled through it. I still do not know what was going through Christopher's mind going out into the wilds of Alaska unprepared.
Posted by Angela - Bookaunt at Friday, August 21, 2015