Submarines, Secrets and a Daring Rescue by Robert J. Skead and Robert A. Skead 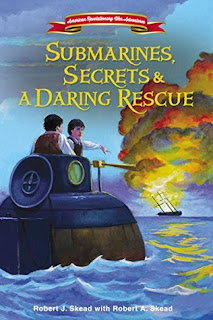 Synopsis:
In this second book in the American Revolutionary War Adventure series, Submarines, Secrets, and a Daring Rescue, twins Ambrose and John Clark find themselves volunteering for another mission to help the newly forming United States. Inspired by their success in delivering a secret message to General George Washington himself, the boys step up to help transport much-needed gunpowder to the patriots and end up in an even more dangerous situation, trying to man one of the first submarines and then, later, attempting a prison break to rescue one of their older brothers.

Follow these brave young patriots as they follow in their father s footsteps and rely on each other, their considerable courage, and God s providence for guidance and strength.

What I thought about this book:
I thought this was a good way to tell a story of the Revolutionary War for kids to not only understand but to enjoy. The writing was done so that to me the book read quickly and I am sure my nephew will love it. I did not realize that this was a part of a series but I will now be looking for the first book to share with my nephew as well. I liked how the book not only told a story but has a lesson to be learned. I think this is a good book for fourth grade to seventh grade to read alone.

What did I think of the cover:
I thought the cover was nice. It got you interested to see what the story was actually about.
Posted by Angela - Bookaunt at Thursday, August 13, 2015