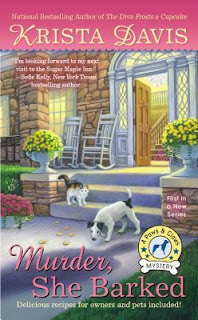 Synopsis:
The Sugar Maple Inn in Wagtail, Virginia, is the country's premiere vacation hot spot for pet owners who can’t bear to leave their furry friends behind. But this tourist town smells trouble when a killer goes on the prowl....

Holly Miller's life has gone to the dogs. She has no job, her boyfriend's former flame is sniffing around, and a scruffy but loveable Jack Russell Terrier is scattering crumbs all over her borrowed car. Just when she thought things couldn't get worse, a troubling phone call about her grandmother sends her rushing home to the family inn on Wagtail Mountain.

The staff—and a frisky Calico kitten named Twinkletoes—adopts Holly and her new dog on arrival. But someone in this friendly town is bad to the bone. One of the employees at the inn has been killed in a hit-and-run accident—which is looking anything but accidental. Now Holly and her furry companions will have to nose out the murderer before someone else gets muzzled.

What did I think of the book:
I thought this was a fun start to a new series. I loved Wagtail and think it would be a great place to visit on vacation if not to move to. It was so cute how the whole town was geared towards dogs and cats. I felt bad for Holly and was hoping some things would change for her in the end. Of course you could not help but love Olma. Zelda and Casey were two other characters that I really liked. I am hoping to see more of Zelda and Holmes in the future books. Twinkletoes is a very interesting cat and I liked how she attached herself to Holly oh and we can't forget about Trixie. I am so glad she found a forever home with Holly. I am looking forward to continuing with this series.

What I thought of the cover:
I think this book has a cute cover. To start with I liked the pink color that was used. Then you have the inviting front porch of the inn. And what is not to love about the picture of Trixie and Twinkletoes. A very inviting cover to me.

About the Author
Krista Davis is the national bestselling author of the Domestic Diva Mysteries. Multiple books from that series have been nominated for Agatha Awards and have hit the New York Times extended list. Krista lives in the Blue Ridge Mountains of Virginia with a brood of cats and dogs, including a snoopy Jack Russell Terrier and a nosy Calico cat. Her friends and family complain about being guinea pigs for her recipes, but she notices that they keep coming back for more.