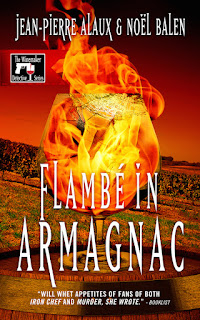 
Synopsis:
A small town holds fiercely onto its secrets.
In the heart of Gascony, a fire ravages the warehouse of one of Armagnac’s top estates, killing the master distiller. Wine expert Benjamin Cooker is called in to estimate the value of the losses. But Cooker and his assistant Virgile want to know more. How did the old alembic explode? Was it really an accident? Why is the estate owner Baron de Castayrac penniless? How legal are his dealings? The deeper the Winemaker Detective digs, the more suspicious characters he uncovers. There is more than one disgruntled inhabitant in this small town. As we witness the time-honored process of Armagnac distillation and the day-to-day activities of the hunt, the market place, and the struggle for power and duck confit, we get a glimpse of the traditions of southwestern France where this mystery of possible arson and murder lies below the surface.


About the authors
Jean-Pierre Alaux is a magazine, radio and TV journalist when he is not writing novels in Southwestern France. He is the grandson of a winemaker and exhibits a real passion for wine and winemaking.For him, there is no greater common denominator than wine. He gets a sparkle in his eye when he talks about the Winemaker Detective, which he coauthors with Noël Balen.


Noël lives in Paris, where he shares his time between writing, making records, and lecturing on music. He plays bass, is a music critic and has authored a number of books about musicians in addition to his novel and short-story writing.


About the Translator
Translator Sally Pane studied French at State University of New York Oswego and the Sorbonne before receiving her Masters Degree in French Literature from the University of Colorado. She has translated several titles in this series.
***

Buy the book | on Indiebound | Amazon | on Barnes & Noble

Visit each blogger on the tour: tweeting about the giveaway everyday of the Tour will give you 5 extra entries each time! [just follow the directions on the entry-form] Global giveaway open internationally: 5 participants will each win a copy of this book. Print/digital format for US residents Digital for all other residents ***


CLICK ON THE BANNER TO READ OTHER REVIEWS, EXCERPTS, AND A GUEST-POST

Excerpt:
“No offense, Philippe, but I’d like to taste a brandy from Château Blanzac. I’m sure you have that on hand. Just to help me form an opinion.”
Benjamin detected the hint of a frown on his affable friend’s face. “I’m afraid I’m all out. I would gladly have…”
Then his wife betrayed him with her typical spontaneity. “Philippe, go look in Grandmother’s display cabinet. I think there’s a bottle that Francisco brought us. Remember it, dear? For your fiftieth birthday.”
“What would I do without you?” Philippe sighed. His ruse had fooled no one.
Benjamin was taking two cigars in silky wrappers from his leather case when Philippe disappeared behind the double doors to the office. He knew his friend was a big fan of Havanas. The Cubans guaranteed an hour of sheer pleasure. No doubt Jean-Charles de Castayrac’s Armagnac would make the occasion even more memorable.
He was about to imagine them raising a glass to the deceased cellar master when an ear-piercing crack pulled him out of his musings. Beatrice, Virgile, and Benjamin ran to the window. A peach tree had snapped under the weight of the ice. The winemaker glanced at Beatrice and saw that she was shivering.
No sooner had they absorbed the sight of the felled peach tree than the sound of breaking glass rang out behind the door. “Damn it all!”
“Oh, that doesn’t sound good,” Beatrice said, pushing back the lock of blond hair that seemed to have a mind of its own.
When Philippe opened the door, the exquisite fragrances of honey, pear, and orange preserves wafted into the kitchen. A long silence ensued.
In a cloud of smoke, Benjamin finally looked Philippe de Bouglon in the eye. “Now I know why you were envious of Lord de Castayrac’s Armagnacs. And if you weren’t my friend, I’d almost suspect you of having broken the bottle to avoid comparison.”
“Benjamin, I think my subconscious got the better of me.”
“That’s exactly what I was thinking, you old scoundrel!”
Posted by Angela - Bookaunt at Monday, August 17, 2015